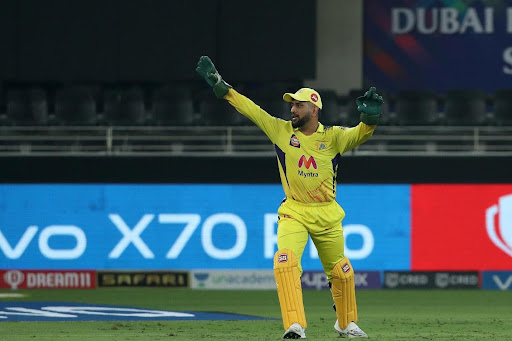 After winning the fourth Indian Premier League (IPL) title for Chennai Super Kings (CSK), MS Dhoni gave an update on his future for the franchise of IPL.

Chennai Super Kings (CSK) beat Kolkata Knight Riders (KKR) by 27 runs in the final battle of Indian Premier League (IPL) 2021 in Dubai on Friday to win their fourth title of the league.

Faf du Plessis put a blistering knock; consisted of a half-century, scoring 86 runs off 59 deliveries to help CSK put up a competitive target of 192 for three.

While chasing the above-par total, KKR was restricted to 165 with the loss of nine wickets in the allotted 20 overs.

It was a dream moment for CSK after an ugly finish of their last season, the Chennai-based franchise won their fourth title.

After the victory, MS Dhoni said that his future for the franchise depends on the BCCI and how the franchise looks at the auction of the upcoming players.

“Again I’ve said it before, it depends on BCCI. With two new teams coming in……we have to decide what is good for CSK. It’s not about me being there in top-three or four. It’s about making a strong core to ensure the franchise doesn’t suffer. The core group, we have to have a hard look to see who can contribute for the next 10 years,”

Read here: I would never have Ashwin in my team, says who?

Dhoni was also thankful to the fans coming from all over the world. Even though the tournament was held in UAE, there were still a lot number of CSK fans and the skipper is hopeful to see the full house in Chepauk next year.

“I would love to thank the fans, wherever we’ve played, even when we were in South Africa, we’ve always had a good number of CSK fans. That is what you crave for. Thanks to all of them, it feels like we’re playing in Chennai. Hopefully, we’ll be back in Chennai for the fans,” Dhoni added.

Chasing 193 in 20 overs, KKR batters were all aggressive and smashing the ball to all parts of the ground. Venkatesh Iyer and Shubman Gill were looking to steal the show as they build a solid 91 runs stand for the first wicket.

Shardul Thakur took his side back into the contest as he struck a twin-wicket over after dismissing Iyer (50) and Nitish Rana on the golden duck.

KKR kept losing wickets one after the other and ultimately fell short of 27 runs to give CSK a fairytale ending of the season.