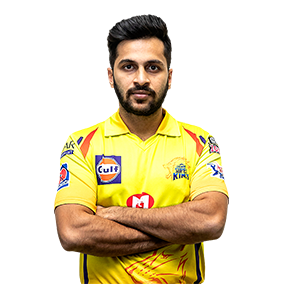 Transfer Career: Shardul Thakur was signed by Kings X1 Punjab in 2015. Rising Pune Supergiants bought him in 2017. Since 2018, he has played for the Chennai Super Kings.

Biography: Coming from a small Maharashtra town, Shardul Thakur had to travel a lot to pursue his cricketing ambitions. He won the Ranji Trophy with Mumbai in his debut season and put in consistent performances at the domestic level. He has been on the fringes of the national team and played just 1 Test. However, his performances in the limited-overs format have been optimistic and Indian selectors will keep an eye out on Shardul in the near future