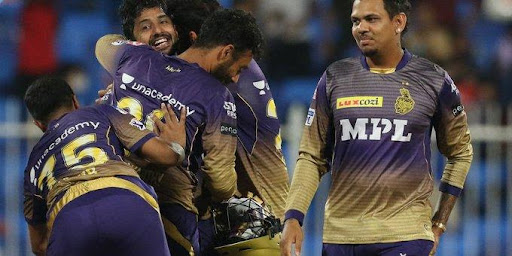 The pendulum swung dramatically at the end but Kolkata Knight Riders (KKR) held their nerves to beat Delhi Capitals (DC) in a thriller by 3 wickets in Qualifier 2 of the VIVO Indian Premier League (IPL) 2021 in Sharjah on Wednesday.

The melodrama is set for the final at Dubai on Friday between the two times IPL winner, KKR and MS Dhoni-led CSK.

Chasing 136 in 20 overs, KKR made a brisk start with Shubman Gill Venkatesh Iyer leading from the front.

The pair did not miss any opportunity to score runs and raced KKR to 51/0 at the end of the powerplay.

The duo added 25 more crucial runs to take their side on 76/0 in the next four overs. Two overs later, Iyer brought his half-century to mark his third of the season.

DC finally got the breakthrough in the next over when they were inching closer to the 100 runs stand.

Nitish Rana and Gill took the responsibility from there to add 27 runs but DC struck again with major damage of three quick wickets, conceding only three runs as KKR moved from 123/1 to 126/4 in the 18th over.

Anrich Nortje then got rid of Eoin Morgan in the penultimate over as DC summed up the equation to 7 runs in the final over.

Ashwin was handed the ball to bowl the last over and he sent back Shakib Al Hasan and Sunil Narine in the first four balls of the over.

However, with 6 off 2 balls, Rahul Tripathi creamed a maximum to get KKR a seat for the final with a ball to spare.

Earlier the day, KKR elected to ball first, remained unchanged while DC brought in Marcus Stoinis in the place of Tom Curran.

KKR made a tight start for DC as Shakib bowled a one-run over while Lockie Ferguson conceded just four in the second over.

Prithvi Shaw then shifted the gear in the third over after hitting Shakib for 12 runs in the over.

Shikhar Dhawan then smashed two maximums in the next over of Sunil Narine to take KKR on 32/0 in four overs.

However, introducing Varun Chakravarthy into the attack was a brilliant move as he gave KKR an immediate breakthrough in Shaw.

Stoinis then joined Dhawan in the middle to move the scorecard across 50 in the eighth over.

The Kolkata-based franchise kept a good hold of the ball as the runs rarely leaked which rewarded then another wicket and this time it was Stoinis getting back to the pavilion of Shivam Mavi.

Chakravarthy picked up another wicket three overs later when Shakib took a decent catch to dismiss Dhawan on 36.

Meanwhile, Ferguson took the wicket of DC skipper, Rishabh Pant in the 16th over as Tripathi completed the catch.

Shimron Hetmyer got a second life in the next over when Chakravarthy missed it with the slightest of margins.

The left-hander made them pay with two huge maximums in the next over. Hetmyer got undone in a mix-up while Iyer with an unbeaten 30 took DC to 135/5.