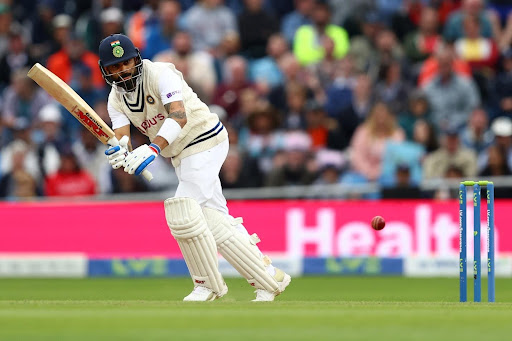 Indian skipper, Virat Kohli has rejected the idea of playing with an extra batsman and he keeps focusing on playing with five specialist bowlers despite batting errors.

Virat Kohli has denied the advice to play with an extra batsman given by Sunil Gavaskar that went on air and he vowed to play with five specialist bowlers despite their big loss at Headingley against England where they lost the third Test match with an innings and 76 runs.

While answering the question to the press, Kohli declined the idea to play with an extra batsman that Sunil Gavaskar has been continuously advocating on air.

“You are talking about a pure batsman?”

he countered when asked if he would play a sixth specialist batsman.

the skipper gave a straightforward reply.

“If your top six (including keeper) don’t do the job there is no guarantee that the extra guy can bail you out. You have to take pride in taking responsibility and doing the job for the team.

“If you don’t have the ability or resources to take 20 wickets in a Test match, then you are already playing for two results and that’s not how we play,”

India will be playing their fourth of five Test matches against England at the Oval, starting from September 2 and it is expected that at least one if not two among Ishant Sharma, Jasprit Bumrah, and Mohammad Shami would be rested.

“That’s bound to happen as it’s a logical and sensible thing to do. We don’t want to push individuals to a place where they break down and that conversation is important.

“We will have that conversation with individuals and you can’t expect that in a short turnaround like this guys can play four Test matches in a row. So we will assess who are the guys who will be given that any number of days to recover and be okay for the fifth one.”

It can be predicted that Ishant Sharma could be benched after his poor bowling display at Leeds. However, the skipper did not give any signs on Ishant Sharma.

“I am not obviously watching his run-up as I am standing in the slips,”

Kohli was sarcastic when asked if he felt that Ishant was having a problem with his run-up.

“I watch the bat of the batsman and I am not analyzing how he (Ishant) is moving in the field. I think he moved similar to the last game. There was no issue whatsoever and as a batting group we failed in the first innings and in the second innings, we did a much better job.

“As a bowling group also, we accept that we were not consistent enough. That’s it.”

Kohli also did not have a good time in media interactions and he blamed the press for being an unnecessary noise outside, about the type of questions they ask.

“I know what happens when we lose one game. I maintain this in the past that we are not going to fall into this space of picking on issues and not one or two things to talk about. We win as a team and we fail as a team.”

He nearly lost his cool when a press member asked if the team would have any discussions about the backfoot play.

“I honestly don’t know what to say to that question,”

“I mean how do you play a ball on the backfoot which is not back of length?” he had a question thrown back at the journalist.

When he tried to elaborate whether due to the lack of backfoot play, India is missing out on runs, Kohli said,

There was also a question raised during his chat with Michael Atherton and he spoke about the fact that the Indian top-order is continuously failing to perform which puts huge pressure on the lower batting order and if he should push Rishabh Pant up the order.

When a question popped up about what was creating trouble – line or length, he finally gave a smile.

“Thank God, finally it looks like a cricket press conference,”

he gave another response in a sarcastic tone.

He further said that the media always give them the opportunity by asking these questions so we can shut their critics by coming back stronger.

“Because it’s a new day after tomorrow and the day after. We like to be in a situation where people start questioning us and the ability of our team. That’s the situation we love best. I can guarantee, guys are hurt and when they are hurt, they badly want to correct it.”