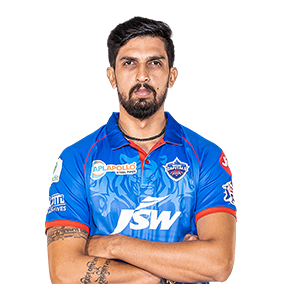 Ishant Vijay Sharma is an Indian cricketer who represents the country at the international level. He is the tallest Indian cricketer to feature in every format of the game. Ishant is a 6 ft. 4 in. right-arm fast-medium bowler and plays as a right-handed batsman.

He is the eleventh Indian bowler who picked up a hundred wickets in just seventy matches and crossed the 150 wickets mark in tests in 53 tests. He played his first Ranji Trophy for Delhi at 18 and swiftly climbed the stair of success. He has donned jerseys of multiple Indian Premier League teams in his long career of thirteen years.

The constant jumping from one team to another also shows that Ishant never aced the format of IPL. However, Sharma is currently with Delhi Capitals, and the IPL 2020 season could be a breakthrough season for him.

Ishant, popularly known as Lambu, was born on 2 September 1988 in Delhi. His father’s name is Vijay Sharma, and his mother’s name is Grisha Sharma. He tied the knot with former India women basketball player Pratima Singh on 10 December 2016. The Delhi-pacer was rewarded with the prestigious Arjuna Award in 2020 for his contribution to Indian cricket.