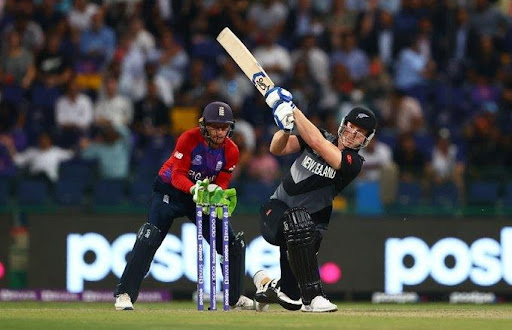 Daryl Mitchell stars as New Zealand down England by 5 wickets at Dubai International Cricket Stadium to play their first-ever final of the T20 World Cup.

Daryl Mitchell plays a blistering knock of 72* (47) as New Zealand down England by 5 wickets at Dubai International Cricket Stadium to play their first-ever final of the T20 World Cup.

New Zealand opener Daryll Mitchell and James Neesham starred for New Zealand while chasing down 167 after a trembling start. Blackcaps have reserved their seats for the maiden T20 World Cup Final.

New Zealand will now face either Pakistan or Australia in the Final of the World Cup at Dubai International Stadium on November 14.

Earlier, New Zealand skipper Kane Williamson opted for the ball first and England had to replace their top-order Jason Roy who was ruled from the competition following a calf injury.

Jonny Bairstow joined with Jos Buttler at the top. The duo started the innings solidly but NZ kept things tight. Bairstow fell off a brilliant catch to Williamson at mid-off.

Buttler tried to play a reverse sweep against leg-spinner Ish Sodhi, which hit him on the pad for an LBW dismissal. He scored 29 off 24 balls, followed by four boundaries.

England wanted to gain some momentum back in the game and Moeen Ali was shifted up the order to complete the task. Meanwhile, Dawid Malan, the best in business played some watchful drives to accelerate the score.

The experienced Tim Southee picked up a crucial wicket of Malan in the final over. He scored 41 off 30 balls followed by four boundaries and a maximum.

Liam Livingstone played a crucial knock of 10-ball 17 while Moeen reached his first half-century in T20 World Cup towards the back end.

The left-hander remained unbeaten on 37-ball 51, followed by three fours and two sixes. England set up a competitive total of 166/4.

Tim Southee was the star performer from the Kiwis as he conceded 24 runs to pick up a single wicket.

While chasing, Blackcaps had a lousy start after Martin Guptill lost his wicket in the first over of Chris Woakes.

The right-arm pacer, in his second over, captured the big fish Williamson who tried to play a ramp shot but it went straight into the hands of Adil Rashid fielding at fine-leg.

New Zealand went into their knees earlier and they had to rebuild the innings after early scalps. Daryl Mithcell was joined along with Devon Conway in the middle and they steadied the innings with a sensible approach.

The partnership went on to 82 runs standoff just 66 balls as Conway was stumped by Jos Buttler in the 14th over. Liam Livingstone provided gave an important breakthrough after Conway made 46 off 38 balls.

Livingstone came to bowl his final over where he picked up another wicket of power-hitter Glen Phillips (2). He finished with impressive figures of 2/22 in 4 overs.

Blackcaps required 57 runs in the last four overs and Jimmy Neesham smashed 23 off Chris Jordan’s 17th over. Meanwhile, Mitchell completed his half-century with a six off Adil Rashid.

Meanwhile, Neesham departed on the last ball off Rashid’s over. He scored 27 off just 11 and brought New Zealand back in the game.

Mitchell took the responsibility after Neesham’s dismissal and completed the chase of the last ball of the 19th over.

Mitchell was awarded as the Player of the Match, after hitting an unbeaten 73 off 48 balls which included four maximums and as many fours.

“We’ve played each other on several occasions, knew it would be a great game of cricket, and really chuffed with the heart that was shown throughout that performance…T20 cricket is a game of small margins, depending on the surface, short side… can all be match-defining. We had wickets in hand which was really important. Neesham came out and hit the ball hard, and changed the momentum of the game. Ultimately the deciding factor.”

Daryl Mitchell is Player of the Match (NZ):

“A bit of a whirlwind, nice to get the job done and move onto the big dance. Challenging, especially at the start. The way Devon Conway batted through the middle, and Neesh, really helped us. It’s a game of momentum, we knew we needed one or two big overs and the way he struck the ball from ball one… With what’s going on in the world, for my dad to travel halfway around the world and be here is pretty cool.”

Eoin Morgan, the skipper of England:

“Full credit to Kane and his team, they outplayed us today, I can’t fault anything that we’ve done tonight…It was a sluggish pitch and we struggled to hit sixes, a good indication it was two-paced. We posted a par score and felt in the game at the halfway side. To have the ability to hit sixes from ball one like [Neesham], full credit to him. I hope to be back, I am still offering enough, and I love playing in this changing room. Incredibly proud to be their leader.”