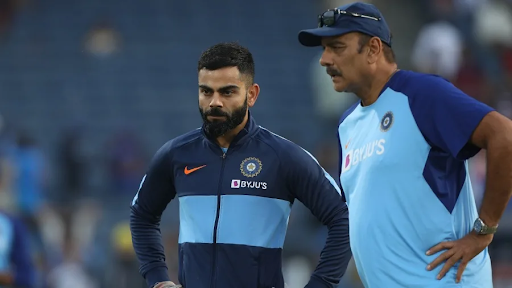 Virat Kohli’s Indian cricket team crashed out of the race for a place in the semi-finals of the ongoing ICC T20 World Cup 2021 after Afghanistan were handed a heavy defeat by 8 wickets by New Zealand on Sunday afternoon. With India failing to make it to the final four, the T20 World Cup is set to have a new champion this year with Pakistan, Australia, England and New Zealand reaching the final four round.

India had lost their first two matches against Pakistan and New Zealand by heavy margins of 10 wickets and 8 wickets respectively, which had virtually ruled him out of the race to the semi-finals. The Indian team did bounce back to record big victories against Afghanistan and Scotland by 66 runs and by 8 wickets respectively, it was still not enough for them to make it to the final four.

India will now play their final Super 12 stage match on Monday against Namibia which will also be the final last time Virat Kohli will be captaining the team in T20 internationals. After giving up captaincy role with the Royal Challengers Bangalore (RCB) team in the Indian Premier League (IPL), Kohli had announced that irrespective of the outcome, the ICC T20 World Cup 2021 will be his last as captain of the Indian team.

Meanwhile, Pakistan, who won all their five matches in the Super 12 stage, will take on Australia in the second semi-final where as searching for their maiden T20 title, England and New Zealand will meet in the first semi-final.

England and New Zealand had played in the final of the ICC 50 over World Cup 2019 in an iconic clash at the Lord’s, where the home team had emerged victorious on the back of a bizarre rule of having hit most boundaries with the match going into one over eliminator. Both England and New Zealand have never won a T20 title and they will be locked in an intense battle on November 10 when the two teams meet at Abu Dhabi on November 10.

Pakistan had won the T20 World Cup all the way back in 2009 and they will be keen to record their second title victory when they face stiff challenge from the Australian cricket team, at Dubai on November 11. Australia have done well so far in the tournament despite having their own struggles in the format, which has been severe as well as challenging for several teams.

South Africa had failed to make it to the semi-finals for having a lower NRR than Australia from Group 1, whereas West Indies and Sri Lanka are the two teams who will have to go through a qualification round once again ahead of the ICC T20 World Cup 2022, which will be held in Australia.

Bangladesh, who had to go through a qualification round before this T20 World Cup, lost all their matches in the Super 12 stage. But at the expense of West Indies and Sri Lanka, Bangladesh have rose to the 8th spot and they qualify for the Super 12 stage of the next year’s World Cup. The same is the fate of the Afghanistan side whereas Scotland and Namibia will also have to undergo the qualification round.