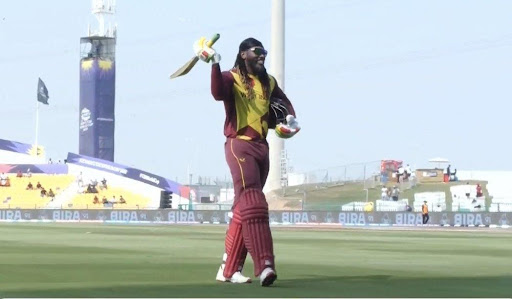 Universe Boss (Gayle) had revealed in an interview on the International Cricket Council (ICC) post-match Facebook show that he has not retired from international cricket yet.

West Indies legend batsman Chris Gayle announced on Saturday that he has not retired from International Cricket.

West Indies played their last T20 World Cup game on Saturday with an 8 wicket defeat to Australia where Bravo had officially announced his retirement but Gayle wants to play his farewell match in front of his home crowd in Jamaica.

“It’s been a phenomenal career,”

Gayle said in a Facebook Live chat with ICC after West Indies’ final match of the T20 World Cup.

“I didn’t announce any retirement but (if) they actually give me one game in Jamaica to go in front of my home crowd, then I can say ‘hey guys, thank you so much.’

“Let’s see. If not, I’ll announce it. Long time and then I’ll be joining DJ Bravo in the backend and say thanks to each and everyone but I can’t say that as yet. I was just having some fun today. Put everything that happened aside. I was just interacting with the fans in the stands and just having some fun seeing as it’s going to be my last World Cup game.”

Gayle also said that he has always been passionate when it comes to playing to West Indies at the International level.

“I want to give thanks to being standing here today, aged 42 still going strong,”

“The career has been great. I’ve had a bit of hiccup here and there. I’ve shed blood, I’ve shed tears in West Indies cricket, you name it, one leg, one hand, I’m still batting for West Indies.

“It was a pleasure always to represent West Indies, I’m very passionate about West Indies. That hurts badly when we lose games and we don’t get the result and the fans [are] so [much] more very important to me because I’m an entertainer. When I don’t get the chance to entertain them it hurt me a lot. You might not that see that expression, I might not show those sort of emotions, but I’m gutted inside for the fans, and especially for this World Cup as well.”

Universe Boss (Gayle) also examined the amount of hard work that he had done behind the scenes.

I work hard. A lot of people don’t see the hard work, but I work hard in silence. I’m a talent and I use it wisely. I grew up from nothing to something.

“I didn’t have anything, I didn’t have the luxury when I was growing up so I used those things to motivate me as well. Start my career, ‘Mum I’ll get you a house when I make the first money, I’ll buy a car. Those are the things that keep you going. With the stability and the mental strength, I have, that carried me right through 20-odd years of playing for the West Indies and playing around the world as well.”