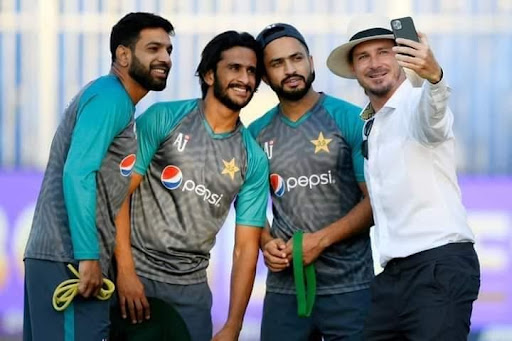 Proteas Legend Pacer Dale Steyn praised the green team for playing watchful cricket and he predicted that Pakistan and New Zealand will play the T20 World Cup final on November 14.

Pakistan is the only team in the tournament that is still unbeaten and was on top of the points table in group 2. Pakistan will now face Australia in the semi-final big clash.

Dale Steyn who is playing the role of a commentator in the T20 World Cup didn’t mention his specific support for the event but he is loving Pakistan’s style of play and on-field fun.

He replied on Twitter that he has friends in all team so he isn’t supporting someone specifically but He likes the way Pakistan are playing their cricket.

“Support is a hard one as I have friends in all these teams,”

Steyn replied while doing a Question and Answer session on Twitter.

“But I like the way Pakistan are playing their cricket, it’s exciting and their fun on the field is infectious,”

Dale Steyn has mentioned Pakistan Captain Babar Azam as the ‘Player of the tournament’ While he also predicted that Pakistan and New Zealand will face each other in the final on Sunday.