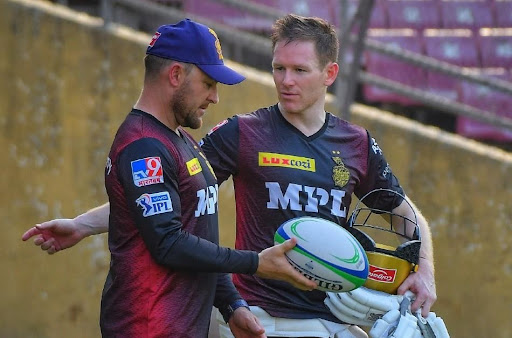 KKR Head Coach, Brendon McCullum says that the team is expecting more runs from the captain, Eoin Morgan but he also stressed out the fact that he is working on it and will come alright.

Kolkata Knight Riders have faced the seventh defeat against Punjab Kings by 5 wickets in their recent match to make things worse for the playoffs.

While different franchises are practicing ‘Change of captain’ due to lack of runs but KKR made it clear that they will be having Morgan for the role.

McCullum feels that Morgan has captained the side brilliantly yet some factors are being worked on him.

Another fact that the franchise has England analyst Nathan Leamon working with them means that KKR won’t change the captain and Morgan will lead till the end.

“I think he’s captained the side really well. But look, you want some more runs from him there’s no doubt in there. You need runs from your overseas players and you particularly need in those key spots as well. I am confident he will come alright. Some guys are really going well.”

The injury of Andre Russel and Morgan’s lack of form forced KKR to strengthen their batting against PBKS and the decision to have only four frontline bowlers did not work out.

“You make certain calls when you are a coach which you got to go on a gut feel as well. (Tim) Seifert has been doing really well when he played for TKR in CPL, he did really well in the middle order. We certainly felt we needed to strengthen the middle order a little bit. We got a good start and that meant we shuffled him behind Morgan and DK.

“When you take out Russell, it’s always difficult to balance your side. We got home in Sharjah but we felt a batter short. We felt if we are able to play the extra batter, we can utilize the bowling of Venkatesh Iyer and Rana, who is a very cagey bowler. When you take one of your big players out, who happens to be an allrounder, you always have that delicate balance to try and balance your side. You have to either go with your batting strong or bowling strong. In hindsight, when we got 160-odd, it would have been nice to have another bowler.”

KKR currently has 10 points out of the 12 matches they have played. They have to win their next two games against SunRisers Hyderabad and Rajasthan Royals and wait for some other results too to stay alive in the league.