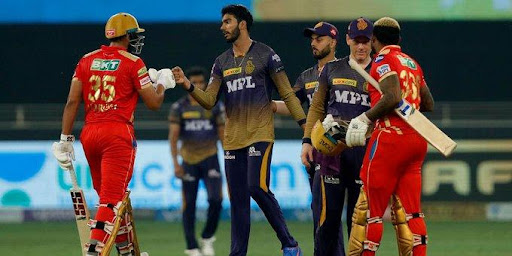 The game turned into the last over thriller but Punjab Kings (PBKS) held their nerve to clinch a crucial victory over Kolkata Knight Riders (KKR) by five wickets in Match 45 of the VIVO Indian Premier League (IPL) 2021 in Dubai on Friday.

Mayank Agarwal, while chasing 166 got an early relief after Eoin Morgan dropped his catch off Tim Southee.

Mayank then let KKR pay for their miss-field and creamed three boundaries and two maximums in the powerplay.

Mayank alongside KL Rahul guided PBKS to 46 without any loss in the powerplay.

The duo completed the 50 runs stand in the seventh over. But KKR finally managed a breakthrough as Varun Chakaravathy struck in the ninth over to get the better off Agarwal after he scored 40.

Nicholas Pooran replaced Agarwal in the middle who got a life in the 10th over but got bowled out in the next over of Chakaravathy.

Meanwhile, KL Rahul brought his half-century and he joined forces with Aiden Markram to get past PBKS 120 in 15 overs.

KKR struck back to get two quick wickets in the next over. Narine got rid of Markram and Shivam Mavi took the wicket of Deepak Hooda.

Venkatesh Iyer then almost managed a blinder but was unfortunate to toss the ball behind the rope and Sharukh Khan managed his second-ball six. He then hit a boundary in the next over.

Rahul hit two boundaries in the penultimate over but lost his wicket on 67 in the final over.

Shahrukh then took his side home after Rahul Tripathi missed a difficult chance.

Earlier, KKR who were asked to bat first made two changes in their team bringing in Tim Seifert and Shivam Mavi in place of Lockie Ferguson and Shivam Mavi.

KKR made an optimistic start as Shubman Gill and Venkatesh Iyer hit 17 in the first two overs.

However, Gill lost his calm in the third over as Arshdeep Singh went through his defenses to disturb the timber.

Iyer and Rahul Tripathi kept the scorecard moving as they took KKR across fifty in the seventh over.

The duo took the benefit of loose deliveries and reached fifty runs stand in the ninth over.

Tripathi hit two boundaries in the 11th over of Natha Ellis, the latter got out in the next over as Ravi Bishnoi had the batsmen caught at deep.

Iyer completed his second half-century of IPL to take KKR across 100 in the 13th over. Two overs later, Iyer’s (67) inning came to an end as Bishnoi struck again.

Mohammed Shami then trapped the skipper, Morgan in an lbw in the 16th over. Nitish Rana then played a brilliant cameo of 31 (18) following two maximums and boundaries.

PBKS managed to put a stop to the runs leakage as they conceded only 14 in the last over to restrict KKR on 165/7.