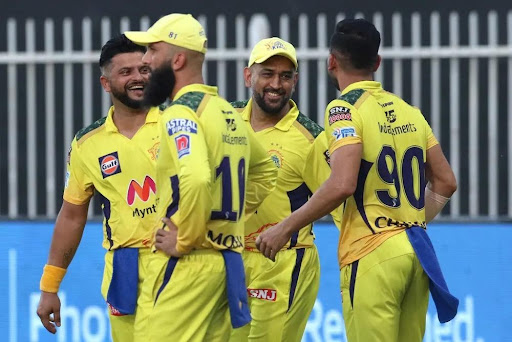 Chennai Super Kings (CSK) has become the first team to reserve their seat in the playoffs after beating SunRisers Hyderabad (SRH) on Thursday at Sharjah.

MS Dhoni-led Chennai Super Kings (CSK) has become the first team to qualify for the playoffs after beating SunRisers Hyderabad (SRH) by 6 wickets in a low-scoring contest of IPL at Sharjah on Thursday.

The victory came as a result of a disciplined bowling display by CSK bowlers before the batters did a fine job to take their side home.

It added two more points in the account of SRH, making a total of 18 points in 11 matches as they lost 2 and won 9 games to earn the first spot on the IPL points table.

CSK skipper, MS Dhoni later revealed that the bounce offered at Sharjah was different and he told his bowlers to take benefit of the conditions.

“The bounce of the wicket was different – instead of knee height, it was shin height, and once the batsmen figured out that they have to hit straight, they succeeded,”

“The bowlers tried to swing it upfront and got hit straight when they pitched it up too much, but then adjusted very well. I told the bowlers that they needed to exploit the conditions in today’s game. If the oddball stopped early on, it started coming onto the bat later,”

CSK will now face Rajasthan Royals in Abu Dhabi on Saturday and Dhoni will be expecting a similar performance from his side to cement their top spot in the points table.

Do not miss: Find out why Chris Gayle leaves IPL in the midst?