Eoin Morgan: Venkatesh Iyer is a real find for KKR 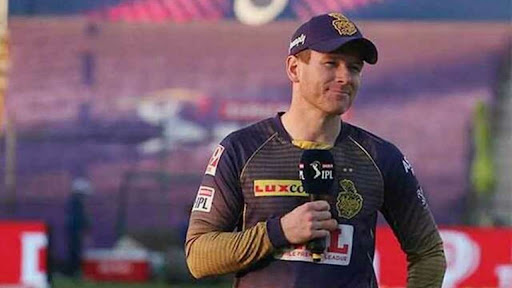 Eoin Morgan at the toss in IPL

Punjab Kings defeated Kolkata Knight Riders by 5 wickets to get their second win in the second leg of the 2021 edition of the Indian Premier League.

The Knight Riders and The Kings became the first two teams to play their 12th match of the ongoing campaign and the KL Rahul-led side got themselves up to the fifth position. The upcoming weekend of the world’s biggest cricketing festival is nicely set-up with the rest of the teams still having a match in hand.

Eoin Morgan, the losing captain heaped praise on the late bloomer Venkatesh Iyer who has impressed with both bat and ball in only 5 matches so far.

“Yeah, Venkatesh Iyer is some player. He’s a real find for us (Kolkata Knight Riders), has been with us the whole campaign and we have watched him in practice.. above all his attitude is fantastic for a guy that plays fearlessly as he does with the bat. He takes a lot of responsibility with the ball, Dre Russ leaves a huge gap in the all rounder position for us but to have someone come in and contribute is really outstanding.”

Morgan was in a confident mood and very upbeat about his team’s chances to qualify for the knockout stages of the cash-rich tournament with the Kolkata-based franchise sitting in the fourth position.

“We have played some great cricket in the second half and have some positives to take away from tonight as well. Two more games to go, we will fight hard and hopefully get a couple of good results and be in the playoffs.”

Also read: Is this the end of the road for David Warner as a Sunrisers Hyderabad player?

With a target of 168, Punjab skipper KL Rahul came in to face the first delivery of the innings and stayed to anchor the run-chase till the second last ball.

He was deservedly awarded the ‘Man of the Match’ and whilst accepting the award, the Indian batsman talked about how his team fought for the victory and the struggle of adapting to different weather conditions in a short while.

“’ll take the two points. We played it smartly. Realised it was a decent wicket and can’t experiment too much. Went slightly defensive with the ball. Wasn’t much spin. Wanted to make the batters hit to the bigger side. With the bat also we’ve given clear roles to players. Obviously want to finish games. Weather’s not been too kind coming straight from England. Win will give us confidence and hopefully we’ll build on it. ”

The 29-year old also talked about the return of Shahrukh Khan and his batting performance whilst listing the reason for dropping the promising Harpreet Brar.

“These are things that kill me as a captain. Don’t want to leave out the Indian boys. With a heavy heart had to leave Harpreet out. Had to see what would be our best XI with Chris (Gayle) leaving the bubble. Shahrukh has been batting brilliantly in the nets. Saw how strong he is in the first phase. He’s asking a lot of questions and wanting to finish games. Today he played proper cricket shots, got a few boundaries and we all know he can hit the ball a long way. He can finish games, he has done it for Tamil Nadu.”