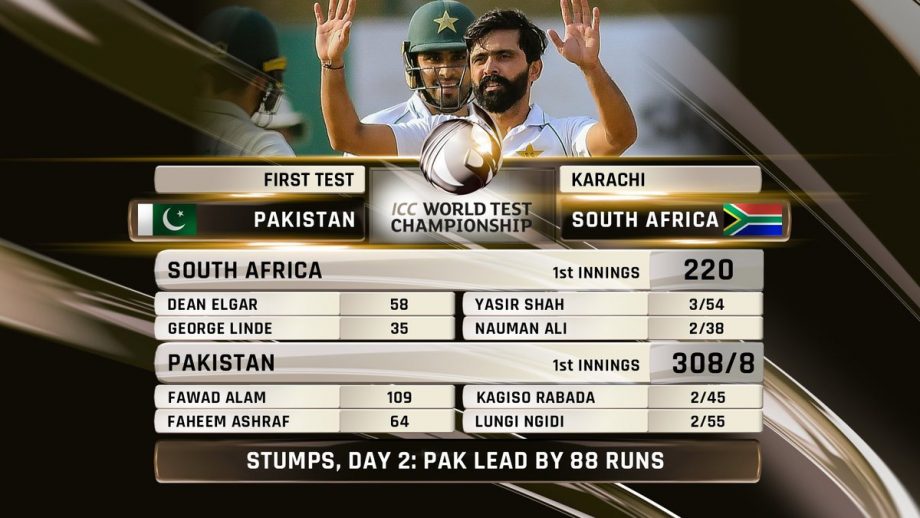 Pakistan played a rigid inning on day 2 of 1st Test at Karachi on the back of Fawad Alam’s magnificent century along with the support of Azhar Ali. Faheem Ashraf took care of the final session to lead by 88 runs at the end of the day.

A lion may get tired of chasing its predator or a cat may get bored of playing with its food but Fawad Alam never gets tired of beating his opponents in Test cricket.

On day 2 of 1st Test at National Stadium Karachi, Pakistan could not have imagined the day the result they have produced in the end. The long-forgotten left-hander, Fawad Alam played a magnificent knock of 109 to put Pakistan in a steady position at stumps.

Pakistan lead by 88 runs with 2 wickets in hand, South African bowlers worked hard in all three sessions but the surface did not offer much assistance they had expected, plus the half dropped chances from the fielders went against SA.

However, the whole day consisted of significant partnerships but the one between Fawad Alam and Faheem Ashraf. Fawad Alam’s unique technique mixed with the elegance of Faheem Ashraf produced both entertainment and effectiveness in the game.

Faheem played his natural game and he hit a pair of boundaries to Kagiso Rabada to get going. He did not give much respect to the bowling attack and within no time Pakistan exceeded the total of South Africa and Faheem completed his half-century with a couple off Anrich Nortje.

After he got dismissed with a misfortune of slightly clicking the ball into stumps by himself off Anrich Nortje, they had already done the damage with a 102 runs stand for seventh wicket, annoying South African bowlers to try different ways.

In the second session, things were going well until Maharaj came and broke the partnership. Azhar Ali tickled an edge behind the stumps which was caught nicely by Quinton De Kock off Maharaj.

Muhammad Rizwan came next to the crease and he had a good record with an average of 55 at this ground over the past 5 years and he picked quickly from where Azhar Ali left, alongside his partner Fawad Alam.

Muhammad Rizwan played a quick inning and went for Lungi Ngidi to the extra cover in the over before tea and as we know everything comes at a price. The next ball he tried to play at a third man but gave a straight catch to the slip fielder.

South Africa used many tactics but none of them would work. They changed the fielding and bowling over the new ball but the expected results were not coming until Fawad Alam threw away his wicket in a plate to Ngidi, tried to flick on the leg side but it went into the hands of Temba Bavuma.

There was a little drama at the end of the day when Hassan Ali got bowled by Keshav Maharaj but it was called a no-ball as the umpires checked that the foot was overstepped. Pakistan will continue with the lead of 88 runs and 2 wickets in hand.