Brentford will host Arsenal in the English Premier League eight-tour match at the Brentford Community Stadium. The fixture will take place on September 18, beginning at 16:30 IST.

Brentford have had a great start to the season, with two wins, three draws and only one defeat. And even that defeat could be viewed as a miracle for Fulham, with Aleksandar Mitrović snatching the three points with a 90th-minute goal.

Looking at the table, they might look like an average Premier League mid-table side, but that’s not really the case: in their last fourteen games, Brentford have seen just three defeats in the EPL. A top-6 level record, if not top-4. The Bees surely preach the ‘My home is my castle’ principle, with the hosts going unbeaten in seven of their last eight matches at Community Stadium.

The key in the success lies in the ability of such a modest side to make the most of their limited resources, through intelligent selective transfers. Last season, for example, they signed Christian Eriksen for free, thereby becoming one of the few teams who deigned to give the talented playmaker a chance following the UEFA Euro 2020 incident. And such credit has paid off, clearly there’s more than just a poke in the sky here. The management makes extensive use of statistics and various metrics, and all their decisions are taken on the basis of analytics. Moreover, this applies not only to transfers, but also to their own performance and the assessment of opponents.

This season, the Red and Whites have already managed to shock the world by humiliating Manchester United in 35 minutes, unloading four goals to the Devils.

Despite going eighth in the table, Brentford have the second best scoring attack in the league with 15 goals (Liverpool have the same number, while only Man City have more – 20).

Ivan Toney, who was signed for just €5.60m in the 20/21 season from 3rd-tier League One, is a stand-out figure here. Through the use of in-depth analysis, the Bees essentially put a major punt on an under-the-radar noname. And, suddenly, he became instrumental in achieving promotion to the Premier League (netting 33 goals and giving 10 assists in 52-match campaign) and, what’s more, he continued to produce goals, helping the club stay in the Elite the following season. Admittedly, such an achievement takes a lot of effort (there are plenty of examples of ‘lift clubs’ that never manage to stay in the EPL).

This season the Englishman, whose transfer value has risen 100-fold in two years (now €40.00m), carries on in the same vein, already scoring 5 goals and providing 3 assists, entering the top-3 of Elite Division scorers list. Moreover, the phenomenon-striker has even earned his first call-up to the English national team. The Bees’ main star doesn’t plan to stop there and hopes to add a couple of goals to his tally against Arsenal.

However, the only thing that prevents the team from aspiring to something more is a defence that is conceding at the level of teams in the last ten. Perhaps the emphasis on the attacking tip-off is to blame. The team’s matches are genuinely entertaining and the scores are sometimes hockey-like.

The Londoners enjoyed a stunning start to the season, winning 100% of their EPL games in August. It was only the fourth time in the club’s history that they started a top-flight season by winning each of their first five matches, after 1930-31, 1947-48 and 2004-05. Mikel Arteta was deservedly voted best EPL manager of the season for the third time in his career, beating Antonio Conte, Pep Guardiola, Graham Potter and Marco Silva.

However, it was all jinxed: in late August – early September some worrying news started to be heard from the Red and White camp, as the team had lost a handful of important players. The defensive midfield zone suffered a particular blow, not only did key player Thomas Partey drop out with a recurrence, but also his replacement Mohamed Elneny suffered a serious injury vs Fulham, dropping out for a lengthy period of time. Arteta and Co. even tried to sign an urgent replacement in the form of Douglas Luiz, but Aston Villa were reluctant to let the player go on the transfer deadline day.

On top of that, they suffered a defeat at the hands of United, which may not be entirely merited as it was Arsenal who led the game at Old Trafford and attacked far more often and more dangerously. But in football, it’s not always the better team that wins. It should be noted that it was the Ghanaian CDM that was sorely lacking here.

Albert Sambi Lokonga, Arteta’s third choice for the position, despite coping satisfactorily, obviously lacked experience and skill in such an important role, especially against such a high-caliber opposition.

And now the unexpected pause in connection with the mourning of Her Majesty Queen Elizabeth II, went very much to Arsenal’s advantage. Thanks to the break, Partey has returned to training, while the team as a whole have rested, recuperated and are ready to start a new winning streak, all the more so because Arsenal have all the prerequisites for it.

For example, Gabriel Jesus is number one among the players of the top European leagues in terms of the number of touches in the opponent’s penalty area (even better than Kylian Mbappé), and Martin Ødegaard excels at winning position in the final third of the field (better than Neymar).

The Gunners approach the 8th round as table leaders, with the loss to Mancunians having been washed away by an excellent debut in the new UEFA Europa League campaign. Switzerland’s FC Zürich were defeated (1-2) thanks to a classy performance from newcomer Marquinhos.

The 19-year-old Brazilian, who was bought for just €3.50m this summer, made the most of his first opportunity, scoring a goal and providing an assist. The winger has been named the best player of the match and has proved he can be relied upon.

“He’s very popular, with no English, just with his smile and attitude. He has earned the respect and admiration of everybody here. It was a big step for him… I think he deserved it, took it really well and he’s a player that needs to keep developing and in order to do that we need to give him opportunities. His attitude towards every coach and player has been seen and it couldn’t be any better. That’s what we expect from the players.”

It was also Fábio Vieira who eventually made his debut against the Merseysiders. The Portuguese’s transfer came as a surprise to the fans, but the talented midfielder looked very promising coming on as a substitute in the game against MU and then making his first start against Zurich. More to come from him in the next matches. The integration of this player is extremely helpful given some groin issues at Emile Smith Rowe as well.

The capital club plan to maintain their onslaught on first place by means of beautiful and productive football. Next up is Brentford, a team well within the grasp of the Londoners, all looking to enter the international break on a major note. Another breather, naturally, will also be beneficial for the Gunners, with a little more time to deal with injuries.

Statistical preview of the match Brentford vs Arsenal:

“We are playing against a very good side. When we beat them a year ago, I think they were not in the same place as they are now. It was still a fantastic win for Brentford against a club as massive as Arsenal and against top players. Doing it again on Sunday would be completely different because for me, now, after [Manchester] City, they are the best performing team in the league.”

“Maybe, in spells, they’ve been the best performing team over the first six games. I think they’ve been remarkable, especially the intensity they play with. I’ve watched a lot of their games, not live, but I remember being sat there on the Friday night for their opening game of the season watching them against Crystal Palace. I was thinking, ‘What?! That’s another level’. For the first 20 minutes, Crystal Palace didn’t touch the ball. And I thought that they could even conted for the title!”

“I think they’ve been fantastic. I think the players are growing, they’ve got the right players in. I know [William] Saliba came back; [Gabriel] Jesus has been a fantastic signing; and I think [Martin] Odegaard, the way he plays at this moment in time, Kevin De Bruyne is a decent player, but he’s not far off him in terms of performances.” 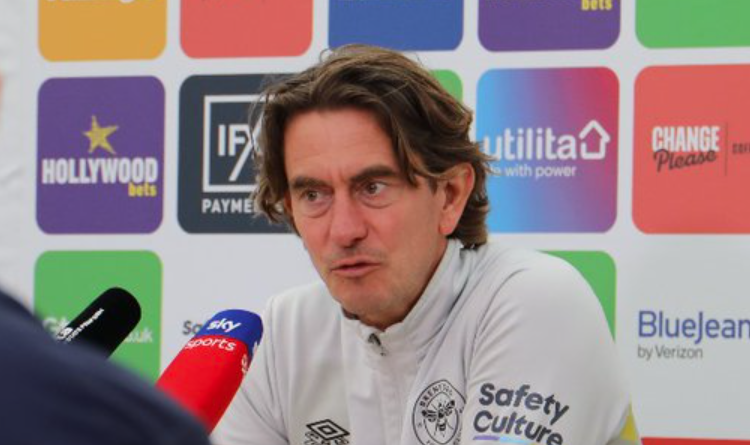 Thomas at the pre-match presser

“I think they are a really good side. I think what Thomas and the staff have done there, not only this year but over the years – I think is remarkable. I think he’s done an incredible job with himself and the coaching staff. The club, the clarity, the philosophy and the vision that they had and how they have executed it, how they’re constantly evolving… I think they deserve a lot of praise for what they’ve done… The way they have performed and the results they got against the top clubs as well, especially at home, just sets the tone and what is going to happen on Sunday and we are very aware of how difficult it’s going to be to beat them.” 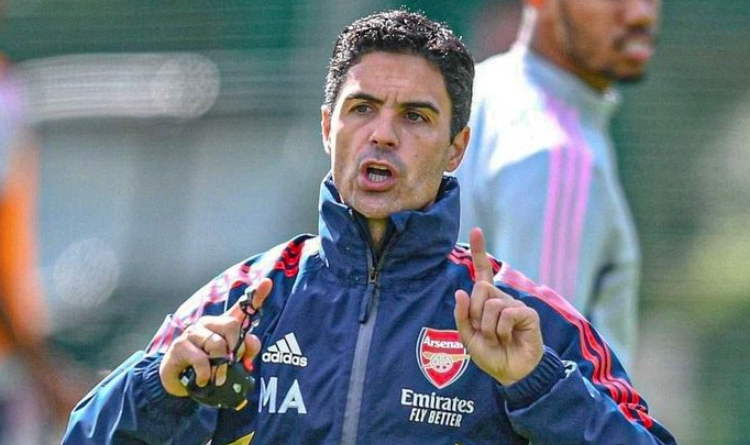 Mikerl at the pre-Brentford training session

Brentford at home are a very serious opponent, who not only know how to crack any defence, but also have the ability to catch the courage. Whereas Arsenal have been conceding absurd goals on a regular basis this season, and at times have simply abandoned the defensive aspect of the game, as was the case with Man Utd. Indeed, the Cunners are head and shoulders above Brentford in terms of quality, but it certainly won’t be easy for Arteta’s team.

Both teams embrace attacking football and won’t be backing down from their usual style of play in this encounter. The two sides will be looking to win and their desire to play on the opposite end of the pitch will result in a number of dangerous chances and plenty of goals.

Don`t miss out 👉: Lyon vs PSG: Preview and  Prediction