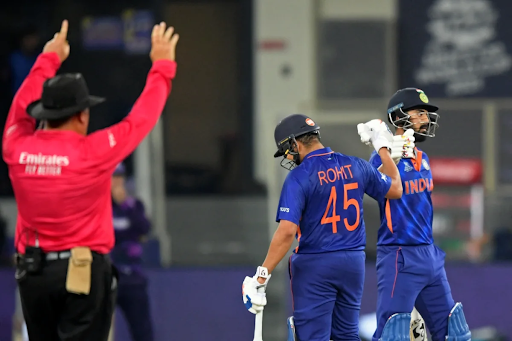 Rohit Sharma was named the captain of the Indian T20I cricket team in place of Virat Kohli on Tuesday, who stepped down from the role after the end of their campaign in the ongoing ICC T20 World Cup 2021. The first assignment for the Indian cricket team under the new captain Rohit Sharma will be against New Zealand, as the two teams clash in a three-match series starting on November 17 in Jaipur.

Rohit, who has won the Indian Premier League (IPL) title several times with the Mumbai Indians — winners in five separate additions — was the clear choice ever since Kohli announced that he would be stepping down from the role of India’s T20I captain after the conclusion of the ICC T20 World Cup 2021. The wicket-keeper batsman KL Rahul has been named the new vice-captain of the Indian team.

The squad announced for the three-match series against New Zealand, who will be playing in the second semi-final of the T20 World Cup against England, included uncapped players in Venkatesh Iyer, Harshal Patel and Avesh Khan. The squad is  also replete with young talent which includes Ruturaj Gaikwad, Shreyas Iyer, Suryakumar Yadav, Rishabh Pant, Ishan Kishan and Mohammed Siraj to name a few.

India will face New Zealand in the three T20Is on November 17, 19 and 21 with the matches to be played at Jaipur, Ranchi and Kolkata respectively. India and New Zealand will also engage in a two-match Test series for which the squad will be announced later on. According to some reports in the Indian media, it is likely that Kohli will be rested for the first Test of the series and Rohit will continue to be the captain. Kohli is likely to return to top-flight cricket for the second Test.