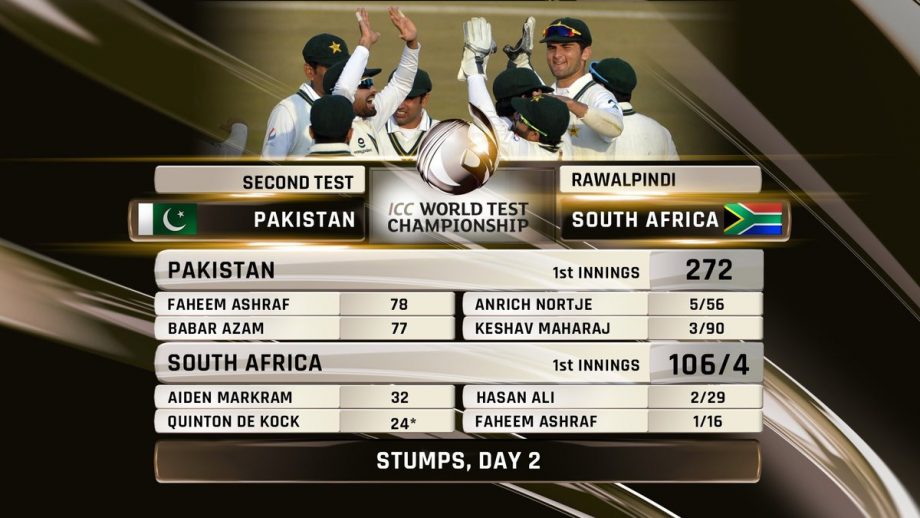 Pakistan took early wickets of South African batsmen to take charge of the second Test in Rawalpindi on Friday despite the magnificent performance of South African pacer, Anrich Nortje who picked up a five-wicket haul in the first innings.

South Africa ended on 106/4 after a trembling top-order in a tricky pitch of Rawalpindi stadium, trailing the first innings total of Pakistan (272) by 166 runs. On stumps day 2, South African skipper Quinton De Kock stayed unbeaten on a breezy 24 including 5 boundaries.

While Temba Bavuma who survived two closed appeals and a drop on 1, was unbeaten on 15 after the right-arm pacer, Hassan Ali picked up two consecutive wickets off two balls.

Hassan Ali picked up Dean Elger in a caught behind for 15 on the fifth delivery of his third over and at the very next ball, Rassie van der Dussen got clean bowled on duck in the final over before tea.

The senior batsman and former skipper, Faf Du Plessis who failed in the first Test match at Karachi with the scores of 23 and 10, managed only 17 runs before Faheem Ashraf got him caught behind after he attempted a loose shot.

Four over before close, the opening batsman Aidem Markram ended his fighting innings of 32 off 60 after top-edging to Shaheen Afridi on mid-wicket off the ball of Nauman Ali, left South Africa struggling on 81-4.

Faheem Ashraf admitted that the first innings total was crucial.

“It’s important to score as many runs as possible in the first innings and that’s why I hung in. The pitch is good for batting but if bowlers try hard they get wickets as well.”

Earlier today, Anrich Nortje added a third five-wicket haul to his collection with the figures of 5-56 to restrict Pakistan’s total to 272.

The 27-year-old picked up the crucial wicket of Pakistan skipper, Babar Azam on the second ball of the day before wrapping up Pakistan’s innings half an hour before tea while Keshav Maharaj finished on 3-90.

Despite the perfect bowling from South African pacers, Pakistan all-rounder Faheem Ashraf played a stunning knock on 78 unbeaten including 12 boundaries in the process of his fourth half-century.

Pakistan ended well on day 1 on 145-3 when rain stopped the remaining play. But the start of day 2 was not ideal for Pakistan as the lost Babar in the first over and his partner Fawad Alam who helped in bringing up a 100 plus partnership got run out by Bavuma in a quick single.

“I was quite happy that the conditions weren’t easy; I learnt a lot from that. You try to prepare as much and as well as possible, but putting in a performance in the subcontinent means a lot… At home, if you run in hard, bowl fast and get the ball in the right areas, you’ve already taken half a wicket a lot of the time,”

said Nortje in a post-match conference.