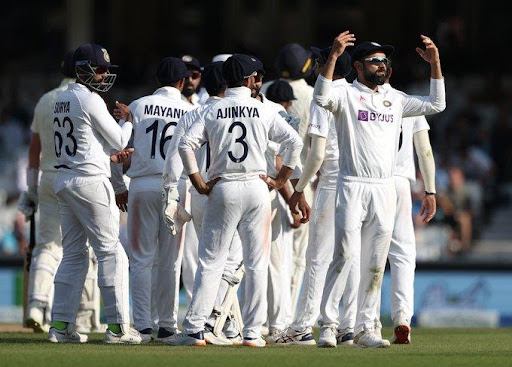 The fifth Test between India and England, which was scheduled to be played at Manchester on Friday, September 10, got cancelled due to fear of Covid-19 in the Indian dressing room.

“Due to fears of a further increase in the number of COVID cases inside the camp, India is regrettably unable to field a team,”

said an amended statement from ECB.

A previous statement from ECB stated that India would forfeit the match which was removed shortly after.

BCCI also released a statement saying that they have ensured ECB to reschedule the fifth Test between India and England.

“The BCCI and ECB held several rounds of discussion to find a way to play the Test Match, however, the outbreak of Covid-19 in the Indian team contingent forced the decision of calling off the Old Trafford Test Match.

“In lieu of the strong relationship between BCCI and ECB, the BCCI has offered to ECB a rescheduling of the cancelled Test match. Both the Boards will work towards finding a window to reschedule this Test match,”

It has been revealed that Indian players wrote a letter to BCCI expressing their fears of Covid-19 for playing the final Test at Old Trafford.

There was a lot of uncertainty going for the fifth Test at Manchester ever since India’s physio, Yogesh Kumar has tested positive for Covid-19.

Following this event, Indian players were called off from the field on the eve of the Test match to undergo a fresh round of tests.

Even though all the players came out negative in the Covid-19 Tests, concerns were being raised about the mental health and readiness of the Indian Premier League (IPL) on Thursday, September 9.

Indian players have gone through another round of tests for whom results are awaited.

Dinesh Karthik, the former Indian cricketer talked with some of the Indian players and asked them about their concerns.

“I spoke to a few of the guys. The general feeling is, after the 4th Test, they are tired. They only have one physio right now, they have done a lot of work with that man and now he tests positive. Now that is the problem. If it was someone else, someone working in logistics, they wouldn’t be this afraid. But when this person got it, that’s when they got the jitters.

“You have to understand that soon after they have the IPL, the World Cup soon after that, the New Zealand tour, one-week turnarounds. How many bubbles can they do? When they assembled in India it was 16 May. It’s four months now. That’s a lot of time.

“Most of the guys today haven’t slept until 2.30 – 3 am in the morning. The Test happening today was out of the question. You have to remember that there is a good chance that a PCR three days later could show a positive and if he is playing in the match, what happens to that person? Is he going to spread it around? Is he the super-spreader that puts every other player in jeopardy?

“And then they have to spend 10 days in the UK, when what happens to the IPL that is supposed to start four days after they land in Dubai? It’s not necessary that if they test negative today … even if one person if test negative in four days time it puts the whole thing into another dimension. They are all in their rooms, they haven’t moved.”

India is now 2-1 in the five-match Test series. The rescheduling or any decision about the fifth Test match will be decided later.

Do not miss: India announces its squad for T20 World Cup