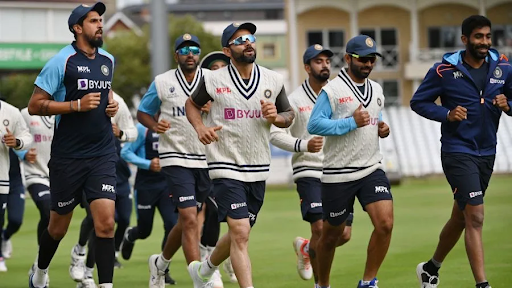 India have said that they will continue with the schedule and take the field on Friday against England in what will be the fifth and final Test match at Old Trafford in Manchester, even though some of their coaching staff members have been tested positive for the coronavirus and have been confined to their hotel rooms.

India’s final session on Wednesday for training was cancelled after another coaching staff member was found positive for coronavirus, with their head coach Ravi Shastri already ruled out of any sort of participation from the ground after he was tested positive during the fourth Test match of the series at the Oval.

India are currently ahead with an unassailable lead of 2-1 in the five match series. The visiting team won the second Test match at Lord’s by a huge margin of 151 runs, something which they bettered in the fourth Test match with a 157-run victory.

It is for the first time since 1986 that India have won two matches on a Test tour of England and India would not want to let go of any such opportunity to inflict further pain on the struggling England side, which has been found wanting in all departments, particularly their batting.

England captain Joe Root has made 564 runs so far in the series but his team is trailing and for the first time since the year 2001, the home team are set to end their cricket season without any series victory at home. Earlier this season, New Zealand had recorded 1-0 victory over the English side, which was their first in this century.

India have clearly been the best side among these two teams on several fronts. Rohit Sharma and KL Rahul have been top notch with the bat for the visiting side, and the same can be said for the middle order batsmen in Virat Kohli and Cheteshwar Pujara, who both have chipped in with crucial runs at important stages in the series. However, India vice-captain Ajinkya Rahane has struggled horribly for runs and there will be no surprises if he is not selected for the fifth and final Test match. India’s middle-order batsman Hanuma Vihari, book and also chip in with spin bowling, can replace Rahane in the playing XI. At the same time, it remains to be seen if India are interested in playing Ravichandran Ashwin in the series at all or not, having benched their best spin bowler who is also ranked world No 2.

England are set to make a few changes in their team with wicket-keeper batsman Jos Buttler set to make a return after missing the fourth match while left-arm spinner Jack Leach, who was added to the side ahead of this contest, is unlikely to feature since Moeen Ali is already in the team and will act as the sole spinner in the English bowling attack.