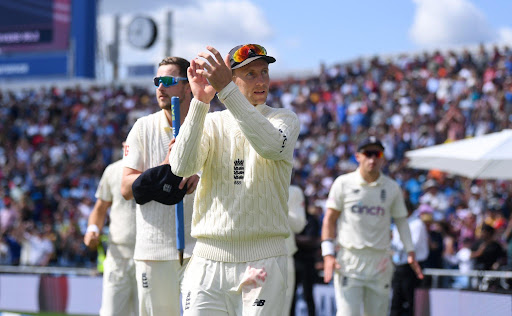 England skipper, Joe Root says that keeping Virat Kohli quit in the remaining two Test matches will be the key to win the series.

Joe Root, England skipper said that the bowlers need to quit Virat Kohli for the remaining two Test matches if they want to win the five-match series.

After England won the third Test, the position stands at 1-1 for both the opponents. The series has entered in a twist as now is the do-or-die situation for both England and India.

Meanwhile, the Indian skipper, Virat Kohli has only managed to score fifty-plus once in the series and he was dismissed by James Anderson twice.

“The credit needs to go to our bowling attack, Virat is a world-class player hence the credit needs to be given to the bowling group. We have been able to keep him quiet, it is an extremely good effort from our bowling group and it is something we have to continue if we have to win this series. We have found ways to get him out, he is a fine player and has done tremendous things in Test cricket, we will have to look at ways to get the best players out,”

said Root in a virtual press conference on Tuesday.

“Absolutely, world-class side like India led by Virat Kohli, I expect nothing less than a response. We would be naive to think otherwise. If we find ourselves ahead at any stage of the game, we have to consolidate,”

With the scoreboard counting 215/2 on the morning of day 4, India should have continued the hustle to come back in the game that they have started on day 3 of the Leeds Test on Friday.

But that did not happen as the English bowlers come with all guns blazing at the Indian batting order to wrap up things in the only opening session to seal the victory by an innings and 76 runs.

“I think it was a brilliant performance, nice template for us to work with really. The challenge is to replicate it and go one better. From a bowling perspective, I think we were flawless, we hit the right lengths early on and we managed to do it for long periods of time. With bat in hand, Headingley was our best outing till now, and hopefully, we can go on,”

“I think more than anything, we are very pleased with how we have sort of grown into this series. We have worked extremely hard to make the series 1-1, now is where the hard work really starts. We will look to go again and keep getting better,”

Do not miss: England all buckled up for the fourth Test