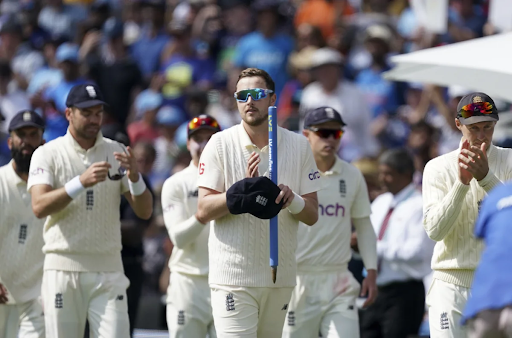 England levelled the series against India 1-1 with two more matches to play after recording a huge victory by an innings and 76 runs in the third Test at Headingley in Leeds on Saturday. India had earlier won the second cricket Test match at Lord’s by 151 runs but the series now stands in balance with the fourth Test to be played at The Oval from September 2.

England did extremely well to drive home the advantage by piling up a first-innings score of 423, which was powered by a splendid 121 from Joe Root, 70 from David Malan, 68 from opening batsman Haseeb Hameed and 61 from the other opener Rory Burns.

India had responded well in the second innings, reaching 215/2 at stumps on the third day evening with Rohit Sharma producing a fine knock of 59 whereas Cheteshwar Pujara scored 91 not out. India captain Virat Kohli had also got off to a start, reaching 45 not out when the stumps were drawn.

India were expected to continue batting responsibly and delay the inevitable, or even put up a fight against England by reducing the deficit which was of 139 runs at the start of play on Saturday. But Pujara was dismissed for his overnight score of 91 not out and Kohli too was removed from the equation even though he had brought up his half-century. The India captain scored 55 from 125 balls with the help of 8 boundaries.

India went on to lose wickets in quick succession thereon, losing 63/8 in the first session itself to lose the contest and hand England series-levelling victory.

India captain Kohli blamed the batting collapse in the first innings for the loss.

“Basically (it came) down to scoreboard pressure. Always up against it when you get out for under 80, and the opposition puts up such a big score. But we did well to stay in the game yesterday, fight back as much as we could, and gave ourselves a chance. But the pressure today was outstanding from the England bowlers and eventually they got the results they wanted.”

“(It was) Quite bizarre, it can happen in this country, batting collapses. We thought the pitch was good to bat on, coming on nicely. But the discipline forced mistakes and the pressure was relentless. Difficult to cope when you’re not scoring runs. That caused the batting order to crumble.”

Ollie Robinson was the star performer from England with the ball. The right-arm fast bowler removed the core of Indian batsmen batting in Rohit, Pujara, Kohli, Rishabh Pant and Ishant Sharma to record a five-wicket haul. Robinson returned with figures of 26-6-65-5, whereas the other fast bowler in Craig Overton returned with figures of 18.3-6-47-3. The senior England fast bowler James Anderson took only one wicket in the form of Ajinkya Rahane as he sent down 26 overs for 1/63.