India fight back against England in third Test at Leeds 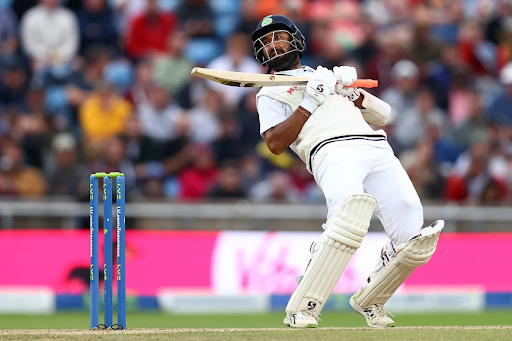 Cheteshwar Pujara was unbeaten on 91 whereas a half-century from Rohit Sharma and an unbeaten 45 from Virat Kohli laid the foundation of a strong Indian fight back against England on the third day of the third cricket Test being played at Headingley in Leeds, on Friday.

India, who had conceded a huge lead of 354 runs in the first innings after they were bowled out for only 78 in their first essay, were 139 runs behind England’s lead and with plenty of batting to come in two days of play left in the contest.

England started the proceedings on the third day of the Headingley Test at the score of 423-8 and they were bowled out without adding anything big to their overnight total. The home team was bowled out for 432 in their first innings, thus taking a lead of 354 runs and applying tremendous pressure on the touring Indian team which has been struggling with the bat.

Mohammed Shami was the pick among the Indian bowlers as it claimed 4-95 from his 28 overs whereas the other bowlers and Jasprit Bumrah, Mohammed Siraj and Ravindra Jadeja claimed two wickets apiece. The senior India fast bowler Ishant Sharma remained wicketless in his 22 overs wherein he also gave away as many as 92 runs.

Joe Root was the top scorer for England with 121, his third century of this series, the number three batsman Dawid Malan made 70, Haseeb Hameed scored 68 and left-handed opening batsman Rory Burns made 61.

India were required to make a strong start after horror time in the first innings. The opening pair of KL Rahul and Rohit Sharma did not disappoint at all, making full use of positive batting  conditions to keep the visiting side steady. However, after seeing off 18 overs, it was Craig Overton who got rid of KL Rahul, getting him caught by Jonny Bairstow which he took in the slip cordon.

This was when the pair of Cheteshwar Pujara and Rohit Sharma got together to stabilise India. After the opening pair of Rahul and Rohit added 34 runs from 115 balls, Pujara and Rohit teamed up to add another 82 runs for the second wicket from 173 deliveries.

Rohit spent plenty of time in the middle as he displayed his batting prowess once again by consuming as many as 156 balls and striking seven boundaries and one six to make 59. His innings was ended in the third and final session by England fast bowler Ollie Robinson, who had him trapped in front of the wickets.