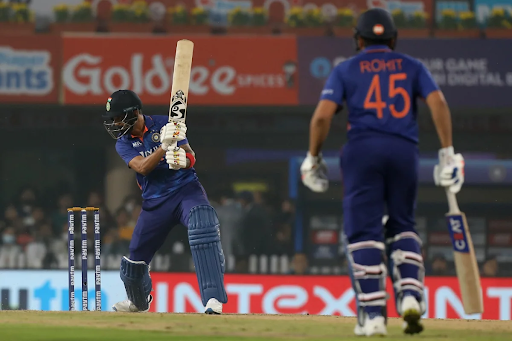 India produced an all-round performance on Friday night to defeat New Zealand by 7 wickets in the second T20I and take an unbeatable 2-0 lead in their ongoing three-match series, in the contest played at the Jharkhand State Cricket Association Stadium Complex in Ranchi.

After restricting New Zealand to moderate total of 153/6 having won the toss and invited the visitors to bat, India did suffer a momentary blip in their chase but eventually went past the finish line to make 155/3 in 17.2 overs with openers Rohit Sharma and KL Rahul smacking half-centuries.

The victory helped India to clinch a series win for the second time on the trot against New Zealand, having defeated the Kiwis earlier in first half of 2020 in an away series which they won 5-0. The series victory is also the first for Rohit Sharma as India’s full time captain in the shortest format and also for their new coach Rahul Dravid.

The Kiwi opening pair of Martin Guptill and Daryl Mitchell made a strong start which saw New Zealand adding 48 runs inside five overs before losing a wicket. Guptill fell for a 15-ball 31, studded with three boundaries and two sixes, to India fast bowler Deepak Chahar.

Mark Chapman, who had scored a brilliant half-century in the first game of the series in Jaipur, also got off to a positive start but he made 21 from 17 balls with the help of three boundaries before being dismissed by Harshal. Mitchell faced 28 balls and hit three boundaries to make 31. The top scorer for the Kiwis in this match was Glenn Phillips, who made 34 from 21 balls with three sixes in one boundary but the others such as Tim Seifert, James Neesham and even Mitchell Santner could not contribute much.

New Zealand’s march was halted by India’s debutant fast bowler Harshal in the company of veteran spinner Ravichandran Ashwin, who both had a game to remember.

Ashwin did not allow the New Zealand batsmen to free up their arms against his wily spin bowling, and Harshal mixed the slower ones extremely well as he did in the Indian Premier League (IPL) 2021 to return with figures of 4-0-25-2. Ashwin, on his part, was measly as he returned with 4-0-19-1.

With heavy dew not allowing bowlers to execute their plans well, India showed little concern when it was their turn to bat. KL Rahul made 65 from 49 balls to record his second consecutive half-century of the series, with the help of six boundaries and two sixes. His opening partner and India captain Rohit Sharma was equally destructive, hitting five sixes and one four to make 55 from 36 balls.

Rohit and Rahul added 117 runs for the opening wicket which set India on the track for a big victory. However, both these batsmen were dismissed in quick succession and Suryakumar Yadav played one on to his wickets which provided New Zealand some respite on a tough evening with the ball. Towards the end, Venkatesh Iyer and Rishabh Pant formed an unbeaten partnership for 18 runs as India showed no further troubles in the locking of the remaining runs.

The third and final match of the series will now be played at the iconic Eden Gardens in Kolkata on Sunday.