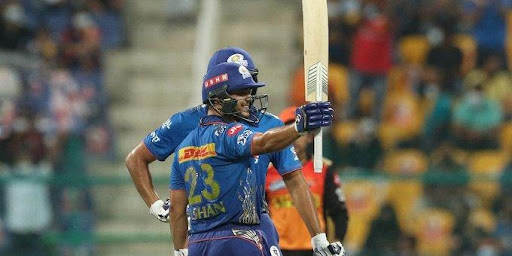 Although MI could not qualify for the playoffs they still managed to end their IPL campaign on a high as they beat SunRisers Hyderabad by 42 runs in Match 55 in Abu Dhabi on Friday.

Mumbai Indians (MI) had to fight for their position in the playoffs against SunRisers Hyderabad (SRH) in Match 55 in Abu Dhabi on Friday.

They started in a quickfire as Ishan Kishan and Rohit Sharma lifted the highest gear as it was a fight of run-rate with Kolkata Knight Riders (KKR).

After setting up the target of 236 in 20 overs, MI had a fine chance of restricting SRH on the lowest possible score but SRH gave a good fight in response and reached 193/8 to fade the chances of MI for the playoffs.

Although, MI won the game by 42 runs their journey to the Indian Premier League (IPL) ended here.

“When you play for a franchise like Mumbai, you are always expected to perform. I wouldn’t call it pressure. More than anything, it is the expectation. What we have created as a group stands out in the last 5-6 years. It was very tough to drop some players…Once we came here, there was a collective failure as a group. But very happy with the win today; we gave everything, and I am sure it was entertaining for the fans too. [To the Mumbai fans] They have been the 12th man. They have always stood by us. Little disappointed we couldn’t go through. Ishan Kishan is a very talented player, just the right position to bat is crucial. He just batted the way we want Ishan to.”

“A very good thing for me as well as for the team. Getting in good touch before the World Cup. A good state of mind is very important. I knew we are in a do-or-die situation. It was just the intent and the positive mindset. I haven’t scored as many boundaries in the cover region this season. You have to be prepared for every circumstance. It’s important to be in that mindset. I had a chat with Virat Bhai, HP [Hardik Pandya], KP [Pollard] – they were all there. I would love to open, and that is what Virat Bhai said. But at the bigger level, you need to be prepared for everything.”

“We had nothing to lose, and had a target in our mind. So we kept running behind it. Happy to be on the winning side. World Cup is a big tournament, so really looking forward to it.”

“Very hot day today, a lot of work in the field to start with, an intense 20 overs for us as a bowling unit, and I batted for a long time today, and both my calves are cramping. The best surface we’ve played on in this tournament. We knew Mumbai would come hard at us, and they did…We were struggling a little bit, even in the early games in Chennai. We tried to do better in the second half, but unfortunately, we could not. We only had a few individual performances, but no complete team performance”.