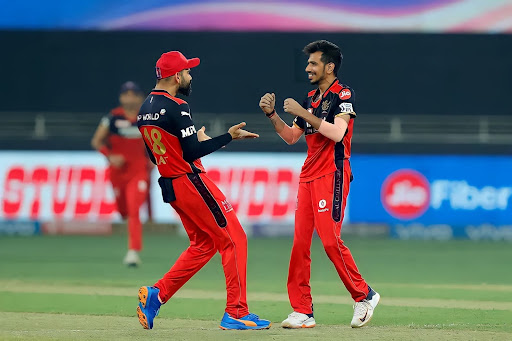 The Royals got off to a grand start as the opening pair of Evin Lewis and Yashaswi Jaiswal scored 56 runs in the powerplay overs. Mohammed Siraj was economical as he conceded only 9 runs off his 2 overs with Garton, Glenn Maxwell, and Harshal Patel getting smashed all over the park.

Daniel Christian conceded 17 runs from his first 7 balls but started the RCB comeback as he dismissed Jaiswal for a score of 31 runs off 22 balls. Skipper Sanju Samson and Lewis continued the onslaught for a couple of overs as RR completed 100 runs within the first 11 overs.

Garton claimed his first IPL wicket as his slower delivery of 106.3 kmph dismissed Lewis for a healthy score of 58 runs off 37 balls. Yuzvendra Chahal got in on the act as he got the wicket of Mahipal Lomror before the uncapped all-rounder could settle in.

Shahbaz Ahmed went through the RR middle order as struck the wickets of Samson and Rahul Tewatia in the 14th over leaving them reeling at 117/5. After a stringy couple of overs, the pressure got to Liam Livingstone and the Englishman was caught in the deep off a Chahal delivery.

Harshal Patel achieved the milestone of 25 IPL wickets in a single season by removing both Riyan Parag and Chris Morris in consecutive deliveries in the last over. The purple cap holder also dismissed Chetan Sakariya off the last ball stopping the Royals to a meager total of 149/9.

RCB got off to a great start as well with skipper Kohli smashing 3 boundaries against Chris Morris in the first over. Fellow opener Devdutt Padikkal was given a lifeline by a Samson dropped catch and the southpaw smashed 3 boundaries in the next two overs before getting clean bowled by Mustafizur Rahman in the last over of the powerplay.

In the next over, Riyan Parag’s excellent dive and direct hit sent the RCB skipper back to the pavilion after a great start once again.

Srikar Bharat used the platform set by the openers and kept smashing the ball to the fence and Maxwell maintained a good strike rate from the other end. The wicket-keeper batsman played an innings of 44 runs from 35 balls that was direly needed to stabilize the Bangalore middle order before becoming Mustafizur’s second victim of the evening.

After Bharat’s wicket, Maxwell went beserk and smashed 22 runs off a single Chris Morris over bringing up his half-century as well as 7000 T20 career runs becoming the fifth Australian batsman to achieve the feat. AB de Villiers provided the finishing touch with 17 balls to spare and RCB has now solidified their hold on the third position by creating a 4-point gap with Kolkata Knight Riders in the fourth position.

Also read: Post-match comments by both skippers, Chahal, and Maxwell