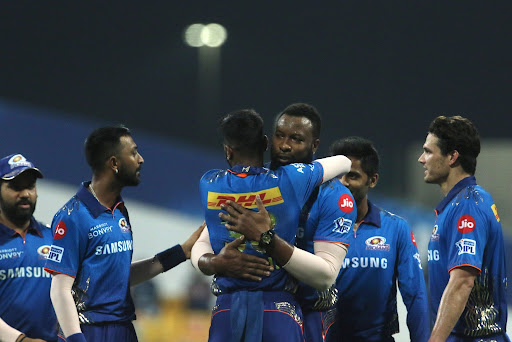 Mumbai Indians defeated Punjab Kings by 6 wickets to get their first win in the second leg of the 2021edition of the Indian Premier League.

A great spell from Jasprit Bumrah, a steady innings from Saurabh Tiwary, and a great all-round performance from Kieron Pollard powered the Rohit Sharma-led side to 2 points after losing three consecutive matches.

Mumbai needed 40 runs from the last four overs with the power hitter duo of Hardik Pandya and Pollard at the crease. The two batsmen scored the required runs in 18 balls with an over to spare and Pollard bagged the ‘Man of the Match’ award for his fiery innings of 15 runs from 7 balls and two wickets in a single over which also helped the Caribbean all-rounder to bag his 300th T20 wicket.

Also read: Is this the end of the road for David Warner as a Sunrisers Hyderabad player?

Whilst accepting the award, Pollard talked about how the 300th T20 wicket means a plethora to the all-rounder despite him being known for his batting skills around the world.

“Very important to get my 300th wicket. I know what I can do in all the facets of the game. I will be more than happy to do what the team needs of me. I enjoyed my 300th wicket which was KL and obviously it’s a landmark and very special. I admit that I don’t have pace, swing, and seam but I can use my brain and get the job done. For us, it’s very important to get these 2 points and hopefully, this will be the much-needed spark in the dressing room.”

The veteran all-rounder also talked about how he approaches the target in crunch situations. He continued,

“You try and watch and target whom you can target and not. For me, it’s just trying to practice and it’s all about practicing and batting according to the situation.”

On the other hand, Mumbai Indians skipper Rohit Sharma talked about the team’s under-par performances in this edition of the cash-rich tournament which sees the defending champions in the bottom half of the table with just three matches to go.

“We do agree that we didn’t play to our potential, but it’s a long tournament and we need to stick to our plans. Reading the situation is very important and we can take a lot of confidence from that. Important not to lose the guard.”

The MI skipper further talked about the return of Hardik Pandya to the team after the injury and listed the reason for dropping the promising Ishan Kishan.

“The way Hardik understood the situation was very crucial from a team’s perspective, it’s important for him to spend the time in the middle as he’s coming back from an injury. It’s a tough call to drop Ishan Kishan, he seems very confident and the reply you get from him was very boosting as well. Saurabh has played the perfect role today and he’s done well to nudge around in the middle overs. We are gonna back him as he’s a very important player for us.”

Earlier in the day, Kolkata Knight Riders trumped Delhi Capitals on a slow surface winning their third match of the four games played by the Eoin Morgan-led squad in the UAE in IPL 2021.