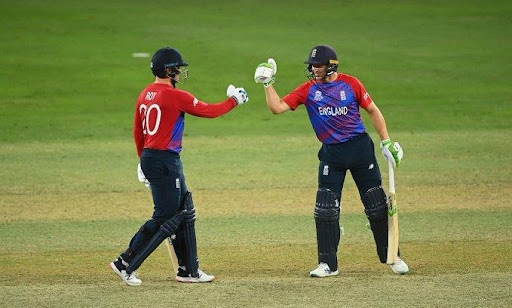 England beat Sri Lanka by 26 runs on the back of a brilliant 101* cameo from Jos Buttler, who became the first batter to score a ton in T20 World Cup 2021 and England, secures their place in the semi-finals.

The opener, who had scored an unbeaten knock of 71 against Australia in the recent match, crossed his previous mark of 83 and reached 213 runs in the tournament.

Earlier, Sri Lanka won the toss and opted to field first. The plan seemed to be working as England lost three wickets within the power play.

Hasaranga de Silva provided the first breakthrough with his googly when Jason Roy (9) tried to play a sweep shot.

In the next over, he dismissed Jonny Bairstow on a golden duck. In between his overs, Dushmantha Chameera sent Dawid Malan (6) back to the pavilion.

After the powerplay, Jos Buttler and the skipper Eoin Morgan were struggling on the crease on 36/3. The pair showed some responsibility with the sensible batting and steadied the ship.

Buttler reached his fifty in 45 balls and then shifted the gear with powerful hits that bamboozled the Sri Lankan bowling. Morgan joined the forces with Buttler to score a boundary and three maximums in his 36-ball knock before being knocked out by Hasaranga.

Jos Buttler reached the maiden century of the tournament on the last ball of the innings in 67 balls after hitting a maximum, followed by six boundaries and six maximums.

Chasing 164, Sri Lanka lost the ground early with the loss of quick wickets and they were struggling at 77/5 after the 11th over.

Read here: Tabraiz Shamsi breaks the record for most wickets in the T20 World Cup

De Silva was undone by Livingstone after Jason Roy combined with substitute fielder Sam Billings in the deep to take a blinder while Shanaka was lost in a mix-up by the performer of the night Buttler in the death overs.

Adil Rashid, Chris Jordan, and Moeen Ali all picked up two wickets each whereas Chris Woakes and Liam Livingstone picked up a single wicket apiece.

“I’m incredibly proud of everything we’ve done tonight. I felt the guys had to fight unbelievably hard, particularly with the ball and in the first 10 overs with the bat. Conditions continued to change and then Tymal going down asked another question of ourselves but I thought Liam Livingstone and Moeen Ali stepped up unbelievably well to support the other guys with the ball. But I can’t fault our guys tonight…He combines them along with reading the game, knowing where and when to score. If he gets on top, he punishes you,”

“I think staying patient and keeping my head. I found it really tough early on. I managed to get a really good partnership going with Morgs and we tried to attack the back end. We were just trying to get something going, were finding the spin bowlers a bit tricky, and thought 120 might be a good score. We each tried to take the small side and target that and I really enjoyed batting with Morgs…[About the final ball six to bring up 100] I was trying to guess where he was going to bowl, to be honest. I was pretty calm. But I think at that stage I’d batted for a long time, just staying patient and hoping he’ll miss,”

said the player of the match, Jos Buttler (ENG).

“The whole tournament, the bowlers have been outstanding in the first 10 overs. It’s been a concern for us the back end every game. For most of the guys, it’s their first World Cup and the experience is very low…But credit to Jos and Morgan, the way they played they showed the experience behind them in international cricket. Six months back, we were not the same team. But these boys have come a long way in this tournament and am really happy about the way the boys have been fighting,”