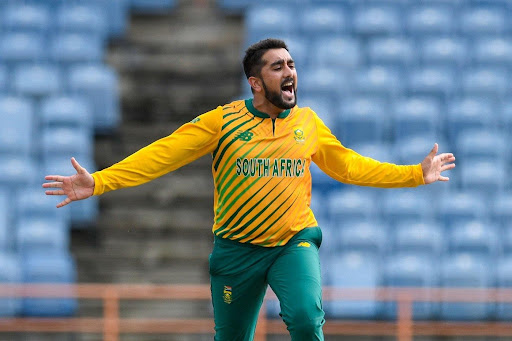 Proteas leg-spinner Tabraiz Shamsi has broken the record for most T20 wickets in a calendar year with his three wickets against Sri Lanka in the ongoing T20 World Cup.

South African leg-spinner Tabraiz Shamsi has taken the most wickets in a calendar year in the T20 format during the game against Sri Lanka in Sharjah on Saturday.

He broke the record of Uganda’s Dinesh Nakrani and Australia’s Andrew Tye who took 31 wickets in a calendar year. Shamsi has now put 32 wickets in 2021 and is also the World’s no.1 bowler in the T20I rankings.

In the list of most wickets, Tabraiz Shamsi and Wanindu Hasaranga are the only bowlers who have managed to take more than 30 wickets in a calendar year.

Both the players are playing in the T20 World Cup 2021 while Bangladesh left-arm pacer Mustafizur Rahman got 26 wickets in 2021.

Read full article: Pakistan sweeps everything on their way to the semi-finals

Shamsi picked up three wickets and just gave 17 runs in his four overs that helped his side to seal the victory.

He dismissed Banuka Rajapaksa, Avishka Fernando, and Wanindu Hasaranga in the middle overs to help Africa take the lead early in the match.

Pathum Nissanka scored the highest 72 runs in the innings for Sri Lanka with the help of six fours and three sixes.

Since making his debut in 2017, Shamsi has played 45 T20Is for South Africa and got 53 wickets with the best figures of 4/25 against Pakistan earlier this year.