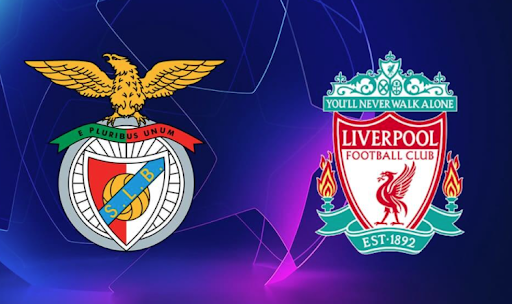 SL Benfica will host Liverpool at the Estádio da Luz in the UEFA Champions League quarter-final, first leg. The match will take place on March 05, beginning at 00:30 IST.

The final matches of the 2022 World Cup qualifiers have been played. Portugal and Poland have already secured a trip to Qatar, with the third participant to be named at a later date. In the meantime, let’s enjoy the Champions League. April 5 sees the first two games of the quarter-finals. Benfica and formidable Liverpool will face each other in one of them at the Da Luz stadium.

In the Primeira Liga, the 37-time Portuguese champions have all but lost their hopes of claiming another title after 28 rounds. Nelson Verissimo’s side produced 19 victories and four peaceful outcomes, which brought them 61 points and third place. The gap to the leader is currently 12 points, with the leader Sporting has 1 game in hand.

The team’s league-best attacking performance, which has totalled 70 goals, is astonishing, with Núñez being the top scorer not only for the team, but also for the entire league. The striker attracted a lot of interest from some of the best clubs in Europe.

Talking about recent form: after their success against Estoril (2-1), the Eagles were unable to cope with Braga (2-3) on the road.

The Reds were also unlucky in the League Cup, when they lost in the final to Sporting (1-2).

Speaking of the journey in the world’s most prestigious club tournament: Benfica had a tough group against Bayern, Barcelona and Dynamo Kyiv. The Eagles started the tournament with a nil draw against Dynamo, then the Lisbon side beat Barcelona (3-0), suffered a 0-4, 2-5 defeats at the hands of Bayern, drew 0-0 with Barcelona and defeated Dynamo Kyiv (2-0).

To reach quarter-finals, Benfica overcame Ajax in the Champions League last 16 on aggregate. The Lisbon side drew the first leg (2-2) and in the return leg, Lisbon lost to Ajax in every way, yet again produced the necessary result. Their only shot on target became a desicive goal. It should be noted that, once again, the Dutch were let down by their realization, they looked many times stronger and it was just a miracle that they did not win.

Lucas Verissimo, Rodrigo Pinho and Adel Taarabt will not be available.

Under Jurgen Klopp, the Merseysiders have won all six of their Champions League group stage games against Atlético Madrid, AC Milan and Porto. In the 1/8 finals, their performance was a little less confident, as they had trouble beating Inter in the first leg, and even lost in the second leg which broke their Anfield unbeaten streak. However, the difference of goals sent the Reds further.

In both cases, the English were more likely to take more shots and have more ball possession. The defeat in the return leg came as a surprise, as they looked the favourites due to their immense resources and performance at the distance. In 30 EPL games, the Reds scored 77 goals – the most of any side – while they conceded only 20 in that period. Only leading side Manchester City have fewer.

Liverpool’s display in the English Premier League looks to be a mind-boggling one. In the last 10 rounds, they played strictly to win, and therefore reduced the gap from the leading Citizens to just one point. The Merseyside side, thanks to their rivalry with the club from Manchester, are in great form which helps them excel in various competitions.

For example, they have already won the English League Cup final in the match against Chelsea (0-0, 11-10 penalties).

They also reached the FA Cup semi-finals, having beaten feisty Nottingham Forest 1-0. The first semi-final match against Manchester City is scheduled for April 16. The meeting promises to be spectacular. However, it’s still a long way off.

For now, Merseyside are surely focused on Europe’s premier tournament. In the previous fixture, they opted to beat Inter on the road in the first leg. This time, they could do the same.

There may be some doubt about the result, given that the team’s leading scorer, Mohamed Salah, was defeated by Senegal in the final qualifying match for the 2022 World Cup. The Egyptian must not be in the best frame of mind, especially after the antics of the Senegalese fans.

However, in our opinion, Liverpool still look a lot stronger. Salah’s performance dipped even more after Senegal’s 0-0 defeat in the Africa Cup of Nations final (2-4 on penalties). Nevertheless, the Merseyside side have not stopped winning and scoring thanks to Jurgen Klopp’s great resources and good management.

said the German coach, announcing that all players are available for the match.

Statistical preview of the match Benfica vs Liverpool:

“Benfica are in the last eight of the CL. We can say one of the ‘easiest’ draws, but they are there for a reason. It’s going to be difficult. We have to show them the respect they deserve. You can make whatever you want out of this, but it’s going to be tough.”

Benfica beat Ajax thanks to great luck. Benfica are unlikely to pull off another sensation. Despite the change of head coach, the Portuguese league performance is questionable and they often suffer defeats, especially against tough sides.

The Merseysiders are quite expectedly regarded as favourites, even on the road. It’s fair to say that the level of the teams is completely different. Liverpool are in terrific form, they have demonstrated excellent efficiency and have a solid defence. They have already shown their class in the group stage of the Champions League, it is time to do the same in the quarterfinals. We believe the visitors will secure a confident win over the Portuguese before the second leg to make things easier for themselves.