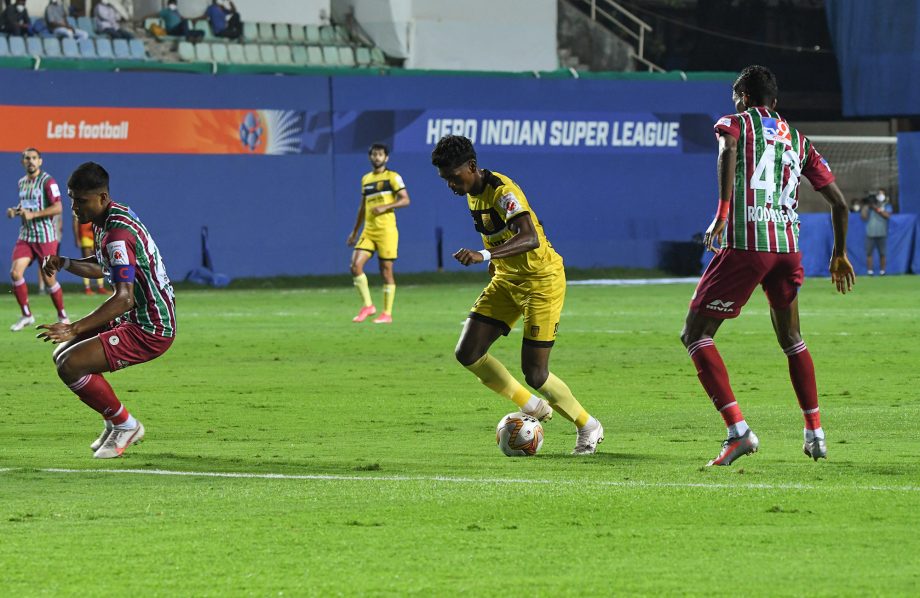 Liston Colaco with the ball against ATKMB (Image Credit: @HydFCOfficial/Twitter)

Hyderabad FC put up a heroic display at the Tilak Maidan Stadium after going a man down in the first five minutes of the match but Manolo Marquez’s men were held to a point courtesy of a Pritam Kotal injury-time goal.

The Nizams made three changes to the starting XI from their 4-0 win over Kerala Blasters with Nikhil Poojary, Lluis Sastre, and Liston Colaco replacing Asish Rai, Hitesh Sharma, and Fran Sandaza. On the other hand, Jose Antonio Lopez Habas made just one enforced change to the Mariners’ starting line-up with Javi Hernandez coming in for the injured Marcelinho.

The match got off to a shocking start with Chinglensana Singh sent off in the fifth minute for fouling David Williams when the Australian forward was through on goal courtesy of a poor header from Odei Onaindia.

Hyderabad went down to 10 men but their spirits never went down as Aridane came up with a goal in the 8th minute. Under pressure from superb pressing, Pritam Kotal passed the ball back to Tiri who let it roll back towards Arindam Bhattacharja but the Nizams’ skipper stepped in and slotted the ball past the goalkeeper to open the scoring on the evening.

Later in the first half, Colaco was sent through on goal on a couple of occasions courtesy of brilliant passes from Akash Mishra and Joao Victor but the young forward failed to double his team’s lead.

Just ten minutes into the second half, an exquisite pass from Williams found left-back Mishra out of position and Manvir Singh took the opportunity and slotted the ball in the top left corner of the net equalizing on the night.

Dutch winger Roland Alberg signed in the January transfer window on loan scored his first goal for the club to give the Nizams their lead back in the nail-biting match. A throw-in from Akash Mishra found Aridane on the edge of the box whose header down into the ground allowed the onrushing Alberg to complete a precise finish in the back of the net.

In injury time, a well-rehearsed corner routine allowed Jayesh Rane to cross the ball towards Hyderabad goalkeeper Laxmikant Kattimanni who spilled the ball straight to Kotal and the Mariners skipper equalized breaking the hearts of many Hyderabad FC fans around the country.

In the last seconds of the match, a cross found Fran Sandaza’s head but the header was straight towards the ATK Mohun Bagan goalkeeper and the Mariners held on to a point after a thrilling encounter.