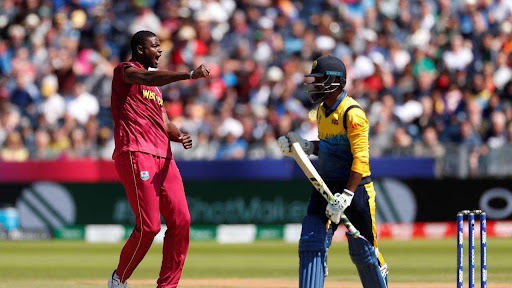 West Indies and Sri Lanka will play the qualifying round in the next T20 edition in 2022 along with Scotland and Namibia while Bangladesh and Afghanistan are assured of direct entry.

West Indies ended their ongoing T20 World Cup campaign with an 8 wicket defeat to Australia on Sunday. This defeat has meant that they would have to take the additional qualifying route to make it to the super 12 for the next edition of the T20 World Cup in 2022.

West Indies are now in 10th position in the T20 format just behind Sri Lanka and will play the first round with Sri Lanka in the next edition.

Both will have to play an additional qualifying round in the 2022 T20 World Cup while Bangladesh and Afghanistan are assured of direct entry.

Bangladesh slipped to the eighth spot in the ICC T20 ranking after losing all their games in the ongoing tournament but their recent series wins against Australia and New Zealand have saved them to play an additional qualifying round.

Now they will be able to play the 2022 edition without the qualifying round which will begin in Australia.

The winner and runner-up of the ongoing T20 World Cup, alongside the next six highest-ranked teams, were determined to qualify for the super 12s in 2022.

England, Pakistan, India, New Zealand, South Africa, and Australia, along with Bangladesh and Afghanistan will be able to seal a super 12s spot next year.

West Indies the two-time champions could only manage to win only one game from five in the 2021 T20 World Cup edition.

West Indies have not opened their T20 World Cup campaign very well against England when they were bundled out for 55.

Sri Lanka has only won two matches in the tournament but defeat to England, Australia, and South Africa meant that they were dropped out of the tournament and could not qualify for the semi-final stage.

Scotland and Namibia, who had already played the qualifying round in the super 12 in the ongoing tournament, will join the West Indies and Sri Lanka in the first round of the next edition in 2022 in Australia.