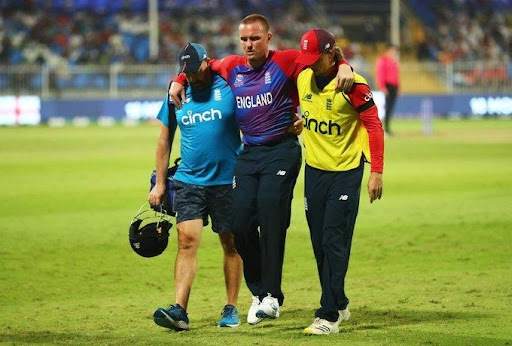 Jason Roy suffered a calf injury and collapsed to the ground while chasing 190 against South Africa. England’s skipper Eoin Morgan admitted the fact that Roy could be ruled out from the tournament which spoiled the mood in the team.

Jason Roy suffered a calf injury and collapsed to the ground while chasing 190 against South Africa, which they lost by 10 runs.

England’s skipper Eoin Morgan admitted the fact that Roy could be ruled out from the tournament which spoiled the mood in the team.

Despite the loss, England has made it into the semi-finals alongside Australia on net run-rate while South Africa has been eliminated from the campaign following a poor run rate.

“We are gutted for Jason, but also sort of half-hoping that he’s okay,”

said Morgan who also faced Tymal Mills limp out of the tournament earlier this week.

“For anybody to miss the latter stages of a tournament, particularly it’s been two guys and two games, that does hurt the mood.”

South Africa posted a target of 189/2 with Rassie van der Dussen being the top runs scorer of an unbeaten 94 off 60 balls.

Dawid Malan scored 33, Liam Livingstone hit 28 to keep England in the chase after Roy left the ground following an injury.

Kagiso Rabada who was expensive throughout the day picked up a hattrick in the last over to restrict England on 178/9.

Read here: How India can still qualify for the semi-final stage

England has already come into the tournament without Ben Stokes and Jofra Archer. Eoin Morgan said that they have enough backups to deal with the injuries and pull-outs.

“As you go through the names that either isn’t here through injury or other reasons, so you go through Archer, Stokes, Sam Curran, Ben (Foakes), Tymal, and now possibly Jason,”

“You look back at the times that you have really explored and tried to build a bigger squad, and I’m sitting here thankful that we have actually done that because we are going need those guys possibly in the next game or the final.”

Roy has scored a total of 123 runs in the World Cup with the best score of 61. The 31-year-old has made his debut in the shortest format in 2008 in which he scored 1316 runs including seven half-centuries.

Eoin Morgan who scored 17 runs in the recent match and was also one of Rabada’s victims, said that he is yet to watch the weakness and strengths of their possible opponents.

“So as prep for every game, I’ll go through strengths and weaknesses of oppositions, I’ll watch relevant games,”

“So I haven’t watched a lot from the other group. So I will do it over the next coming days. Let somebody else worry about it.”

England will be looking forward to becoming a double World Champions after they beat New Zealand in 2019’s World Cup final.