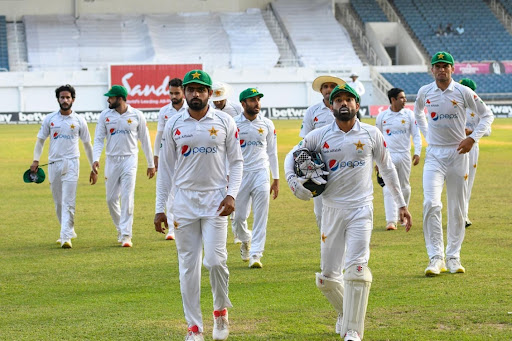 Fawad Alam scored a brilliant century before Pakistan declared their innings on 302/9. West Indies in response could not produce much as they struggled on 39/3 at the end of day 3.

West Indies ended on 39/3 before bad light interrupted the play on day 2 of the second Test at Sabina Park on Sunday. Pakistan declared their innings on 302/9 on the back of a remarkable ton from Fawad Alam, who remains unbeaten.

After losing their openers, the hosts are 263 runs behind the total, Kieran Powell and Kraigg Brathwaite cheaply after being put in to bat in the final session of another weather-affected day.

Nkrumah Bonner (18 not out) and night-watchman, Alzarri Joseph will continue the play from there and the hosts will be looking to put all their efforts to restrict West Indies on the lowest total.

Pakistan had not lost any Test series to West Indies in 21 years and they will be looking to square off the series.

Fawad, who got retired hurt on a heat exhausted day 1 after scoring 76 runs to rescue Pakistan and his partner, Babar Azam, later lost his control to Jason Holder at second slip.

Rain affected the play of day 2 and he had to wait another day to complete his fifth Test century and take Pakistan across 300 as he remained unbeaten on 124.

Pakistan resumed the play on day 3 with only eight balls being bowled before the play got suspended because the bowlers found a wet patch on the crease that could have been dangerous.

After lunch, the play eventually got underway when Jason Holder found ways for his side after getting two consecutive wickets. Meanwhile, Fawad Alam kept scoring runs at the other end.

After Pakistan declared the innings on 302/9, Shaheen Afridi struck twice to dismiss Powell and Brathwaite as WI stood on 9/2. Roston Chase became the next victim but this time it was Faheem Ashraf who cashed the opportunity.

West Indies beat Pakistan by one wicket at Sabina Park which was also played behind closed doors.