Babar, Fawad rescue Pakistan after a terrible start of the second Test at Jamaica 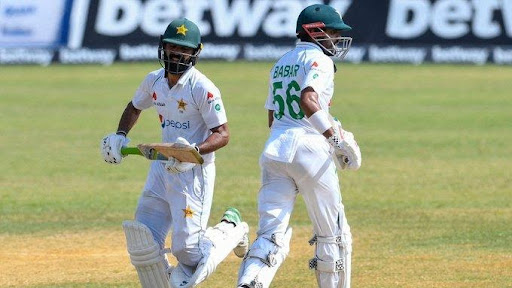 Babar Azam along with Fawad Alam put a remarkable stand after Pakistan started the innings terribly on 2/3 at Sabina Park on day 1 of the second Test on Friday.

Babar Azam missed his century and Fawad Alam may get the chance to enter three figures after the pair rescued Pakistan from an embarrassing 2/3 at the start of day 1’s play at Sabina Park.

Babar scored a brilliantly compiled 75 after five hours at the crease and Fawad scored 76 in his typical style before getting retired hurt of severe leg cramps just after tea to steady the ship.

Kemar Roach once again led the charge with the ball after taking three off 49 runs in 17 overs. He picked up two crucial wickets of Pakistan in the first two overs of the match.

He then came to the ball in the final session and claimed the most important wicket for Pakistan in Babar Azam as he was steadily moving towards his sixth Test century.

He stood with Fawad for 158 runs when the latter had to depart after the sweltering afternoon in Jamaica took the better of him as the temperature hit 34 degrees.

Those dehydrating conditions also took West Indian wicket-keeper, Joshua da Silva who was replaced by Jahmar Hamilton for the rest of the day when the first choice gloveman quit the field before tea.

Pakistan, however, ended their day on 212/4 before stumps, day 1 as compared to the situation when they were looking to bundle out near 150.

Earlier today, their hopes for a solid start went down in the very first over after Abid Ali was dismissed to a fine catch by Jermaine Blackwood at the third slip off Kemar Roach.

In bowling-friendly conditions, the senior pacer then dismissed Azhar Ali on a duck, the former captain edged the ball straight into the hands of da Silva.

Jayden Seales who became a man of the match in the first Test after claiming eight wickets including a fifer in the second innings also joined the earlier party.

He drew the opener, Imran Butt for a full-length delivery to give da Silva another easy catch in nine balls of the play.

Babar and Fawad then displayed serious batting with the skipper playing gorgeous drives in his traditional way and Fawad standing tall as a wall to find runs.

Fawad, who was criticized for his batting stance proved once again that he is a valuable option in crucial situations.

“I thought Kemar (Roach) should have extended his opening spell for a couple more overs given that he was bowling so well and the conditions were really helpful to the bowlers at that time,”

“Still, you have to give credit to the way Babar and Fawad played because they buckled down well and worked hard to get their team in a decent position.”

The duo opened their blades in the post-lunch session to add 83 runs in two hours of the play.

They were looking to add more before Fawad fell victim to the conditions in the final session of the day.

Whether or not, his departure upset his partner, Babar Azam lost the concentration and did not last an hour into the post-tea period via a sharp low catch at second slip by Jason Holder off Roach.

West Indies are looking for their first victory against Pakistan in 21 years. They won the first Test in a nail-bitingly close contest on day 5’s play.

Meanwhile, the visitors will be looking to repeat their efforts from 2005 and 2011 when they lost their first matches before squaring in the two-match Test series.