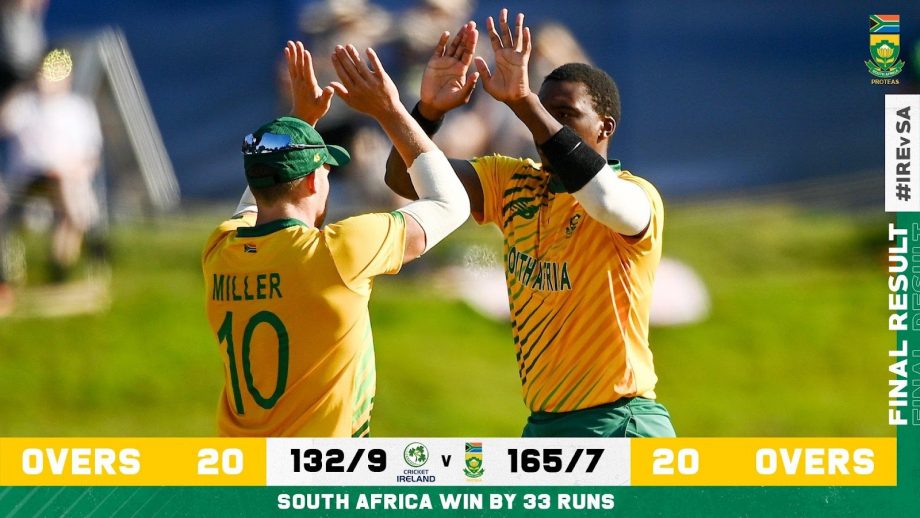 Tabraiz Shamsi starred with the ball with the fixtures of 4/27 while defending the sub-par total of 165 in the series opener at Malahide on Monday.

After losing the toss and being asked to bat first, the visitors found themselves in trouble as Mark Adair and Simi Singh got good control of the ball and they never let the batters settle with a couple of breakthroughs at regular intervals.

If Kagiso Rabada has not shown the intend to bat at lower order, South Africa would hardly manage near 150 runs total in such batting-friendly conditions.

But their pacers turned the game towards their side after bestrewing their top-order inside the power play before Tabraiz Shamsi appeared and went through their middle-order and knocked the wind out of Ireland’s sails.

Every time South Africa tried to up the ante, Ireland’s bowlers struck with the ball whether it was Quinton de Kock, Rassie van der Dussen or David Miller’s dismissals.

But Aiden Markram stood still on the crease and played the most significant innings from the South African batting order.

Adair got some boundaries from de Kock one after the other in the third over but his two balls struck at the right spot to tremble SA as de Kock and Janneman Malan mishit their shots and get caught on mid-off and midwicket respectively.

The skipper, Temba Bavuma too dismissed cheaply before Markram took the responsibility to get SA back on the track.

He produced two significant partnerships, one with van der Dussen of 35 runs and the other with David Miller of 36 runs to get himself 39 off 30 balls before Simi got rid of him with a wild swing.

South Africa was standing at 120/5 and Miller too departed soon. The situation needed someone to take the innings till 20th over and Rabada stepped in to give SA a competitive total of 165.

Chasing 165, Barring Harry Tector (36) and Barry McCarthy (30) put some worth watching fight. Elsewise, nobody showed up with the mindset to win the match.

Shamsi went tearing down the Irish middle-order to get him second four-fer in the T20I’s. George Linde got the first breakthrough after sending back Paul Stirling who greeted him with a first-ball six.

Rabada took the better of Kevin O’Brien from the other side and Lungi Ngidi also joined the party to get Andrew Balbirnie and George Dockrell in quick succession to leave the hosts struggling at 38/4 after the powerplay.

Harry Tector kept the struggle alive with occasional boundaries in his 36 off 34 balls but with no support at the other end, Ireland had made sure of their defeat.

Barry McCarthy saved Ireland from embarrassment with a decent unbeaten knock 30 runs and put a 44 runs stand with Joshua Little to delay the victory of SA.