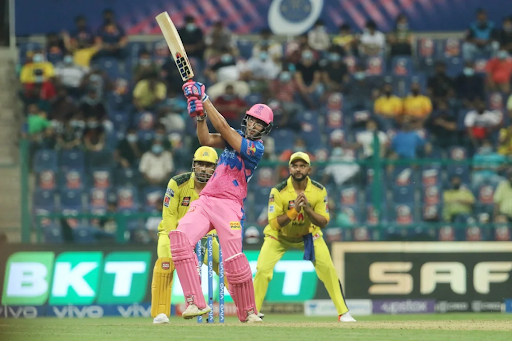 Chasing a huge total of 192 win, Rajasthan Royals reached 190/3 in 17.3 overs with Jaiswal scoring 50 from only 21 balls and Dube starting with 64 not out from only 42 balls. Evin Lewis and Sanju Samson played crucial parts in scoring 27 and 28 respectively while New Zealand cricketer Glenn Phillips remained unbeaten on 14, as Rajasthan Royals recorded a huge victory in IPL 2021.

The seven-wicket victory helped Rajasthan Royals move up in the IPL 2021 points table as they are now placed at the sixth spot with 10 points in 12 matches, having recorded five victories and seven defeats. Below them in the points table are the defending champions Mumbai Indians, who have similar results on the field but a poor net run rate of -0.453 and the tournament’s worst performing team Sunrisers Hyderabad.

Earlier in the contest, it was a maiden century in the tournament by Chennai Super Kings opener Ruturaj Gaikwad, who scored 101 not out from 60 balls while striking five sixes and nine boundaries that helped his side put on a big first-innings score of 189/4.

While Gaikwad punished the Rajasthan Royals bowlers, there were others in Faf du Plessis, who scored 25, Moeen Ali, 21, and towards the end, Ravindra Jadeja smacking 16 and four boundaries to make 32 not out from only 15 balls, to keep CSK pushing on for a big total by the end.

Rajasthan Royals made a rapid start to their chase with their openers Lewis and Jaiswal adding 77 runs inside the first six overs to put them on path for a big victory. Lewis faced 12 balls and hit a couple of sixes and as many boundaries to score 27, but it was Jaiswal who was the star of the show in the beginning for the Rajasthan Royals. The left-handed opening batsman Jaiswal cracked three sixes and six boundaries from only 21 balls to make 50, and he was dismissed right after raising his half-century.

Rajasthan captain Samson once again got a start but he could not convert his innings into a big score, falling to Chennai Super Kings fast bowler Shardul Thakur for 28 from 24 balls, an innings in which he hit four boundaries.

Despite losing a few wickets in a flurry, a superb half-century from Dube kept Rajasthan on the track to victory which they achieved with more than two overs to spare. Dube hammered four sixes and as many boundaries to score 64 not out from 42 balls, in what turned out to be his best performance with the bat in the IPL tournament.

Even though Chennai Super Kings ended on the losing side, they remained at the top of the IPL 2021 points table since they have 18 points from 12 matches with nine victories and three defeats.