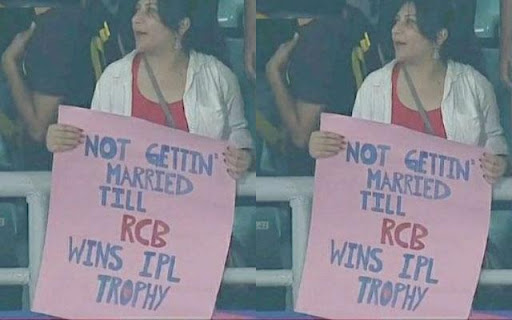 Royal Challengers Bangalore once again left empty-handed from the Indian Premier League (IPL) after they were knocked out of the league after losing to Rajasthan Royals in the second Qualifier round.

Royal Challengers Bangalore once again left empty-handed from the Indian Premier League (IPL) after they were knocked out of the league after losing to Rajasthan Royals in the second Qualifier round.

The loss against RR extended RCB’s wait to win an IPL title. With the new skipper in Faf du Plessis this season, RCB qualified for the playoffs in the fourth place and then defeated Lucknow Super Giants in the eliminator round.

But unfortunately, their journey to IPL 2022 ended there and they could not go beyond that after losing to Rajasthan.

An old image of RCB’s fan that went viral on social media has resurfaced again where she can be seen holding the placard saying: “Not Gettin’ Married Till RCB Wins IPL Trophy.”

RCB batter Virat Kohli had high responsibilities on his shoulders when he came to open alongside the skipper Faf du Plessis in the Qualifier 2 against RR at the Narendra Modi Stadium in Ahmadabad.

In the first over bowled by Trent Boult, Kohli flicked a maximum over the deep-square leg and it looked as if the batter was in fine touch.

However, in the very next over, Prasidh Krishna dismissed the right-hander after scoring just 7 runs. The dismissal was bad for RCB as the former skipper chased a short and wide delivery to nick behind the stumps to Sanju Samson.

The former Indian players Virender Sehwag and Parthiv Patel discussed in detail the dismissal of Virat Kohli and his performance throughout the season.

Sehwag said that Kohli has probably committed more mistakes this season as compared to his entire career.

“When you are out of form, you are just trying to middle every ball to get confidence. In the first over, he did let go of some deliveries, but this is exactly what happens when you are not in form, you go chasing after balls. Sometimes luck favors you, the ball does not catch the edge of your bat. But it did not happen this way. This is not the Virat Kohli we know; this is perhaps some other Virat Kohli this season,”

“The number of mistakes he has made this season, he probably has not made as many in his entire career. When you are not scoring runs, you try to do different things, and then you are dismissed in different ways. This time, Virat Kohli has been dismissed in all the ways possible. He could have possibly let go of that ball or he could have gone hard at it. He disappointed his fans and RCB fans, it was such a big match,”