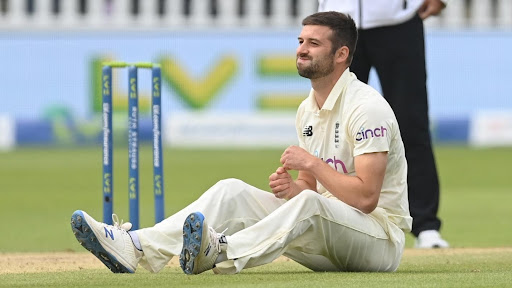 England right-arm pacer, Mark Wood has been ruled of the third test against India after he picked up a shoulder injury in the second Test while fielding.

Mark Wood has been ruled out of the third test match against India at Leads due to a jarred right shoulder. The 31-year old suffered the injury on the fourth day of the second test while saving a boundary at Lord’s.

Wood had bowled well in the second Test at Lord’s, picking up five wickets. India won that game by 151 runs to take a 1-0 lead. Mark Wood will remain with the squad during the third test in Leeds.

“Mark Wood has been ruled out of the third Test against India with a jarred right shoulder,”

read an England and Wales Cricket Board statement on Monday.

“Wood sustained the injury on the fourth day of the second Test at Lord’s and will not be fit to play at Headingley starting on Wednesday.

“He will remain with the squad in Leeds and will continue his rehab with the England medical team.

“The 31-year-old will be assessed at the end of this Test match.”

Injured, Stuart Broad has been already ruled out of the series. Jofra Archer and Chris Woakes are also unavailable for the team due to injuries. All-Rounder, Ben Stokes is on a break from cricket to focus on his mental health.

Due to these injuries, the England team has been entered into a very troubling situation. Many felt Wood should have taken greater care in the field.

“Modern-day cricketers all dive athletically to save runs and the effort is commendable, but it is not worth the risk of injury to a leading bowler.”

ECB has already called up Saqib Mahmood as a cover, and the team is trying to avoid defeat in the Headingley Test. The third test between England and India starts on Wednesday.

England goes into the test series against Kohli’s team tendering not only to level the series but end a run of seven Tests without a victory.