KL Rahul: I don’t think I’ve creamed the ball that sweetly in some time 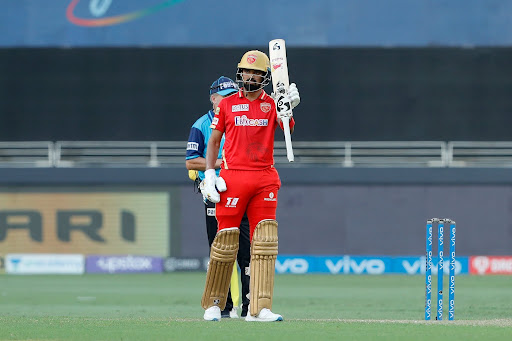 KL Rahul celebrates after his half-century against CSK

Batting first, Chennai openers Ruturaj Gaikwad and Faf du Plessis got off to a cagey start before Arshdeep Singh dismissed the in-form Gaikwad for a score of 12 runs. Moeen Ali became Singh’s second victim of the day for a duck and Robin Uthappa gave his wicket away to Chris Jordan for a cheap score of 2 runs.

Jordan also dismissed Ambati Rayudu for a score of 4 runs followed by MS Dhoni’s dismissal to Ravi Bishnoi for a score of 12 runs. Ravindra Jadeja held his wicket at one end and allowed du Plessis to score freely from one end as the former Proteas skipper scored 76 runs off 55 balls before walking back to the pavilion.

Chasing 135, Punjab came out on the front foot knowing a win inside the first 14 overs of the run-chase will give PBKS a chance to qualify for the Indian Premier League 2021 playoffs.

PBKS skipper Rahul started hitting balls to the fence from the first over and didn’t stop till the last ball as his unbeaten innings of 98 runs off 42 balls helped his team reach the target with 7 overs to spare. The 29-year old batsman smashed 7 boundaries and 8 maximums in his awe-striking innings that blew away the CSK bowling attack.

At the post-match presentation, the Punjab Kings skipper bagged almost all the awards winning ‘Super Striker’, ‘Game Changer’, ‘Let’s Crack it Sixes’, ‘Power Player’, ‘Most Valuable Asset’, and ‘Man of the Match’ awards.

The Bengaluru-born batsman explained the mindset in the run-chase and the contribution of the support staff during the mid-innings break.

“Plan was simple. The numbers guys pulled up a few permutations and combinations. They said if we chase this before 14 overs it gives us the best chance. So the plan was clear and I had the license to go from ball 1. One of those days when it comes off when you have complete clarity. All of them hit the middle of the bat. I don’t think I have creamed the ball that sweetly in some time.”

Rahul also discussed in detail, the talk around his strike rates and his usual role in the team with the middle order often misfiring over the past couple of seasons.

“It was just what the team needs. I know there has been a lot of talk in the last 3-4 years about my strike rate and me playing slowly. But only my team and I know what’s my role and what my responsibility is. I tried to play the role the team requires of me every game. I feel I am letting the team down if I play the kind of cricket I want to play. It’s always team first for me. That’s how I have grown up and that’s how I will continue to play. Today the team needed this. I was happy that I could play this kind of a knock.”

The 29-year old also talked about his methods of preparation and how he views himself as a batsman.

“When you get going like that you feel like you can hit every ball. You need to hold your shape. The only thing I keep telling myself is I am not a power-hitter. I still rely on timing and getting my body in a good position. So I keep telling myself to set up strong, watch the ball, and trust my instincts to play the right shot. In the nets, I train my mind and train my instincts to make the right choice in the middle. There’s no better feeling than hitting the ball in the middle of the bat and watching the ball fly all over the park.”

Later in the day, Kolkata Knight Riders wrapped up an easy win against Rajasthan Royals as the chasing team was bundled for a total of 85 runs chasing a target of 172 runs set by KKR. The Eoin Morgan-led side has almost confirmed their place in the IPL 2021 playoffs barring a 170-run victory for the Mumbai Indians on Friday.