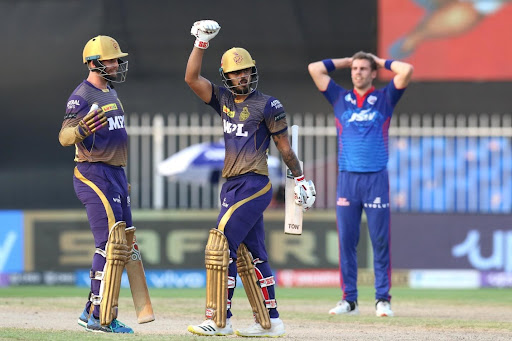 Sunil Narine starred with the bat and ball to take Kolkata Knight Riders (KKR) home against Delhi Capitals (DC) by 3 wickets in Match 41 of the VIVO Indian Premier League (IPL) 2021 in Sharjah on Tuesday.

While chasing 128, KKR were off to a brisk start before Lalit Yadav got the better of Venkatesh Iyer in the fifth over. Rahul Tripathi came to the crease in style while DC also got rid of him inside the powerplay.

DC kept things tight for KKR further as the runs were not coming easily and the Kolkata-based franchise lost Gill and the skipper, Eoin Morgan in the 11th and 12th over respectively.

Dinesh Karthik and Nitish Rana then added a crucial stand of 29 runs. Avesh Khan took another wicket in KKR wicket-keeper batsmen in the 15th over to restrict KKR to 96/5.

Narine then joined Rana in the middle to change the momentum of the game. The left-hander went after Kagiso Rabada in the 16th over to hit two maximums and a boundary and KKR after hitting 21 runs in an over to get close to the target.

Although KKR lost Narine and Tim Southee in quick succession Rana with an unbeaten 36 took his side home.

Earlier, KKR made two changes in their playing X1 as Southee and Sandeep Warrier replaced Andre Russell and Prasidh Krishna while DC brought in Steve Smith in place of Prithvi Shaw.

DC made a solid start as the pair of Shikhar Dhawan and Steve Smith took the scorecard to 29/0 but the partnership was cut short as Lockie Ferguson struck in his first over to dismiss the left-hander.

Narine then struck after the powerplay and went through the defenses of Shreyas Iyer. Smith and Rishabh Pant then added a 37 runs stand before the Australian right-hander chopped his stumps off Ferguson.

After DC lost quick wickets at regular intervals, the scorecard was restricted to 92/6 in the 15th over. Ashwin along with Pant added crucial 28 runs but KKR restricted their opponents on 127/9.