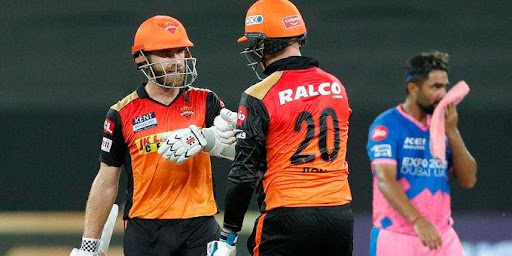 Despite being at the bottom of the points table, SunRisers Hyderabad (SRH) marks their second victory of the league over Rajasthan Royals (RR) after beating them by 7 wickets in Match 40 of the VIVO Indian Premier League (IPL) 2021 in Dubai on Monday.

Jason Roy made his debut for SRH and Kane Williamson starred with the bat as the Hyderabad-based franchise chased the target of 165 with 9 balls to spare.

SRH while chasing the target of 165 runs made a blistering start of the innings, courtesy of Wriddhiman Saha and Jason Roy.

After scoring 14 runs in the first two overs, the pair up the ante as Saha smashed a maximum and a boundary off Jaydev Unadkat before Mustafizur Rahman’s next over cost 13 runs.

Roy then hit four boundaries in the fifth over of Chris Morris to give SRH a quick fifty-plus stand.

RR finally managed a breakthrough in Saha off Mahipal Lomror in the final over of the powerplay.

Roy then joined the veteran Kiwi batsman, Kane Williamson and both kept the scorecard ticking to put 90/1 in 10 overs for SRH.

In the 11th over, Roy went after Rahul Tewatia and creamed six and three fours to complete his maiden half-century for SRH and took his side to 111/1.

Chetan Sakariya got the better off Roy as he dismissed the right-hander on 60. Priyam Garg was next on the list as Mustafizur took a fine caught and ball.

Meanwhile, Williamson kept leading from the front in SRH’s chase and Abhishek Sharma gave him the company. The skipper ended on an unbeaten 51 while Sharma scored 21* to take SRH home.

SRH, on the other end, made four changes to their side. Roy made his debut for SRH, Garg, Sharma, and Siddarth Kaul came into the team in place of David Warner, Manish Pandey, Kedar Jadhav, and an injured Khaleel Ahmed.

RR lost their first wicket immediately as Bhuvneshwar Kumar struck on the very first ball of the innings to dismiss Evin Lewis.

But then Sanju Samson, RR skipper, and Yashasvi Jaiswal made a fine partnership to take RR across fifty just after the powerplay.

However, SRH finally managed to break the opening stand as the left-hander was undone by Sandeep Sharma after he scored 36.

RR got another wicket in the 11th over and this time it was Rashid Khan who got rid of Liam Livingstone.

Samson and Lomror then joined forces to build up an unbeatable 84 runs stand.

The duo took RR across 100 in the 14th over before Samson smacked a maximum to get closer to his half-century.

The right-hander kept going like a fire to cross the 400-runs mark in the campaign and to reach the milestone of 3000 IPL runs.

Meanwhile, after all the action and drama SRH bowled the death overs brilliantly to restrict RR on 164/6.