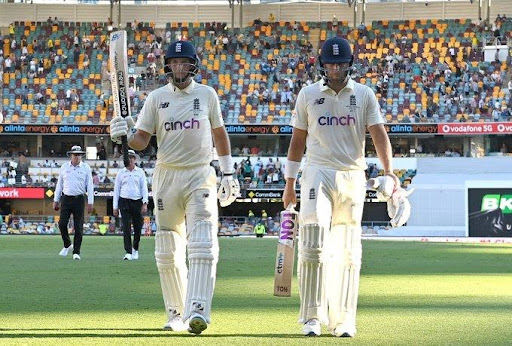 Joe Root and Dawid Malan batted till the final session of day 3 Ashes first Test at the Gabba to give England some fight back in the contest or even the option to draw the match.

Joe Root and Dawid Malan batted throughout the final session of day 3 Ashes first Test at the Gabba to give England some fight back in the contest or even the option to draw the match against Australia.

England ended on 220/2 at the end of day 3’s play with the skipper Joe Root on 86 and Dawid Malan on 80 with 58 runs ahead of Australia after the start of the second innings with a trial of 278 runs.

England had lost both openers before tea, Root, and Malan got comfortable at the crease to defend the Australian bowling attack.

Root’s unbeaten 86 is one short of his highest score in Australian ground that took him past 1500 — 1541 — runs in a calendar year, the most ever by an England batter, surpassing Michael Vaughan’s 1481 in 2002.

He barely offered any chance in his second innings, followed by 10 boundaries, including a surprising reverse sweep-off-spinner Nathan Lyon.

Lyon, who is looking for his 400th Test wicket, never looked like he went through the defenses of English batters.

The Perth century of Dawid Malan in 2017 feels like a long time ago but the left-hander has once again gained momentum at the shores of Australia after spending years in self-doubt and confusion.

Malan said after Stumps on Day 3.

“I actually said to Root when we were on 40 or 50… we both had similar scores… ‘I’ve really missed this”.

“The Barmy Army were singing, the crowd was going and your adrenaline was going (too). I’ve missed having someone trying to blow my head off all the time. You are playing against the best bowlers going around. It’s good fun. It’s really good fun.

“Test cricket is the pinnacle for me. You can do as well as you want in T20 cricket, 50-over cricket, or whatever other format you like, but you’re judged a lot by your Test career. To come to Australia and play against quality fast bowlers on these bouncing wickets is the real test.

“For us, an Ashes series is the biggest series of our calendar. To come here and get runs against this really good attack is very satisfying. I’m so proud to be able to stand out here in an England shirt. Especially to do it here at the Gabba in front of everyone.”

Malan acknowledged the effort of England for putting up a great fight against Australia on day 3 of the first Test at the Gabba.

“We need another 250-300 runs tomorrow to put ourselves in a good position,”

“We need one more 100-run partnership to put a good score on the board and then who knows what can happen? But we learned in the last series [in Australia] that as soon as we think too far ahead, you open the door for them and they’re so brilliant at closing that door for us.

“The job isn’t done yet. Just getting an 80 doesn’t mean you’ve made it. It’s about hopefully scoring the big hundred that will change the game.”

Malan also spoke about the poor display of batting in the first innings on day 1 when the ball was not coming on the bat nicely. But they did not sit idle and prepared for the second innings to come back in the Test.

“The first innings was obviously a disappointment,”

“We hold our hands up. We weren’t good enough and whether the wicket did a little bit or not, we’re better than being bowled out for 140. So for us to come in after a day-and-a-half of hard fielding and do what we did here today was fantastic. But that’s only half the job done.

“We spoke this morning and said we wanted to express ourselves. The last thing we want to do is just be sitting ducks and going out and not scoring. So the chat was about playing the way we want to play. If they bowl good balls, defend them but if they bowl bad balls make sure that we still have the intent to score.

“After what we did in the first innings we needed to park that and put that aside. This needed to be a fresh inning. It’s really probably poor of me to say it, but we started that badly (that) we had to park it. The only way forward in this Test was to actually forget what happened in that first innings and hopefully put into practice all the things we’ve worked so hard on in those quarantine periods. That was the key for us.”