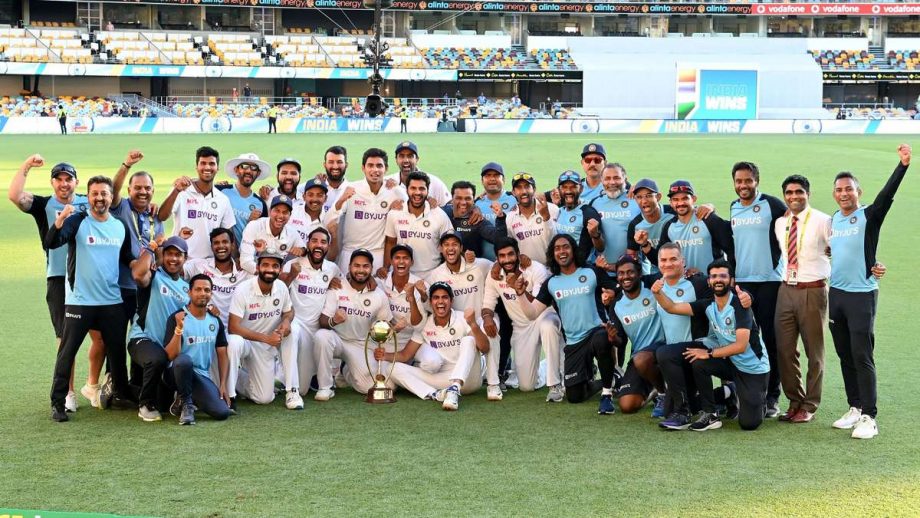 Rishabh Pant starred for India on day 5 at the Gabba with his heroic 89* runs to take his side to retain the Border-Gavaskar trophy against the hosts by 2-1.

India beat Australia stunningly on day 5 of the fourth Test at Brisbane on Tuesday, to retain the Border-Gavaskar trophy by 2-1. Rishabh Pant slammed an unbeaten 89 off 138 balls to take his side across the finishing line. His heroic innings had a lot of T20 touch in it following nine fours and a six.

The tourists had a slow start early today after losing Rohit Sharma on 7 when Pat Commins picked him up caught behind. With the departure of vice-captain, Shubman Gill took all the responsibility and played a fancy 91 runs knock off 146 balls, including 8 fours and 2 sixes.

He was partnered with Cheteshwar Pujara who played a typical Test cricket of 56 runs off 211 balls. There would be no exaggeration in saying that he saved most of the Test on day 5. He was hit on helmet, shoulders and elbows but he survived all of them. Then finally, Pat Cummins took him away with an lbw after the new ball was introduced.

The Indian skipper, Ajinkiya Rahane (24) and Washington Sundar (22) added runs at the crucial part of the game. Pat Cummins blew another wicket after Rahane tried to play on the third-man and ended up being nicked to the keeper.

Washington Sundar tried to play a reverse sweep and this time Nathan Lyon brought the twist in the game, bowled a straighter but Sundar edged it into the wicket. Hopes were still alive for Australia but Rishabh Pant alongside Navdeep Saini scored the winning runs to witness the most memorable history ever.

Pat Cummins was a star bowler from Australia as he took 4 wickets in the second innings. He was given the man of the series award for his brilliant bowling performance throughout the series. The Australian spinner, Nathan Lyon also contributed along with Cummins by picking up two important wickets but sadly not enough to save the defeat.

Meanwhile, Rishabh Pant has broken the record of MS Dhoni of fastest 1000 Test runs as a wicket-keeper. He achieved the milestone in the 27th innings breaking the previous record of 32 innings by MS Dhoni.

“This is one of the biggest moments of my life now, and I’m happy that all the support staff and all my teammates supported me even when I wasn’t playing. It’s been a dream series. The team management always backs me and tells me, you are a matchwinner and you have to go win the match for the team,”

“I keep thinking every day that I want to win matches for India, and I did it today. It was a fifth-day pitch and the ball was turning a bit. I thought I have to be disciplined with my shot selection,”

he replied when asked about his feeling and the pitch conditions.

Moreover, the BCCI president Saurav Ganguly said that the series win is remarkable and will never be forgotten in the history of Indian cricket. He also announced a prize of 5 crores to Indian cricket team as their win is beyond any number.

“Just a remarkable win…To go to Australia and win a test series in this way ..will be remembered in the history of Indian cricket forever ..Bcci announces a 5 cr bonus for the team. The value of this win is beyond any number ..well done to every member of the touring party.”

While the Indian team is getting appreciation from all over the world, how can Virat Kohli be left behind? He applauded the performance of his team with confidence and for those too who doubted them after an embarrassing defeat at Adelaide.

“WHAT A WIN!!! Yessssss. To everyone who doubted us after Adelaide, stand up and take notice. Exemplary performance but the grit and determination was the standout for us the whole way. Well done to all the boys and the management. Enjoy these historic feat lads. Cheers.”

Summing up for the day with an encouraging tweet from the Prime Minister of India, Narendra Modi. The win has gone echoing all over the world, therefore none can stay without appreciation.

“We are all overjoyed at the success of the Indian Cricket Team in Australia. Their remarkable energy and passion were visible throughout. So was their stellar intent, remarkable grit and determination. Congratulations to the team! Best wishes for your future endeavours.”