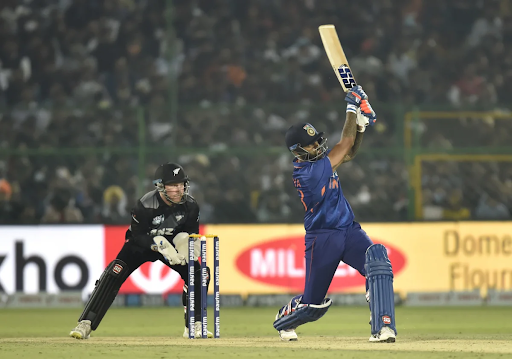 Suryakumar Yadav scored a vital 62 whereas India’s new captain Rohit Sharma smacked 48, as the hosts defeated the visiting side New Zealand in a nervous finish by 5 wickets to take 1-0 lead in the ongoing three-match T20I series on Wednesday night at the Sawai Mansingh Stadium in Jaipur.

India looked cruising towards a comfortable victory when New Zealand pulled things back in control with some disciplined bowling and removing the home team’s in-form batsmen to make a comeback into the contest. The final over required India to score 10 runs, with an inexperienced pair facing off against each other.

India’s all-round debutant Venkatesh Iyer was facing New Zealand’s all-rounder Daryl Mitchell in the final over, in which he hit a boundary off the first ball that he faced in international cricket but was dismissed on the next ball. Mitchell was guilty of bowling two wide balls as well, which ended in favour of India. Rishabh Pant hit the winning boundary when 3 runs were required of as many balls.

India finished at 166/5 in 19.4 overs in reply to New Zealand’s strong total of 164/6 after the home team won the toss and invited the Kiwis to bat first. The senior India bowler Bhuvneshwar Kumar provided his team with a strong start when he removed Mitchell on the first ball that the right-handed batsman faced, but Martin Guptill and Mark Chapman teamed up to take New Zealand ahead.

Both Guptill and Chapman scored half-centuries while they added 109 runs for the second wicket to consolidate for the New Zealand side. Guptill finished at 70 from 42 balls with three boundaries and four sixes whereas Chapman made 63 from 50 balls with six boundaries and two sixes.

There was not much contribution from the other New Zealand batsmen as they failed to keep the momentum going. Tim Seifert made 12 which was the only score in double digits up after Guptill and Chapman. For India, Bhuvneshwar was impressive with figures of 4-0-24-2 and so was Ravichandran Ashwin, who returned with 4-0-23-2. Deepak Chahar and Mohammed Siraj claimed one wicket each.

In their reply, India were off to a fiery start with the pair of Rohit and KL Rahul adding 50 runs in five overs to put the team on track for a big victory. However, Rahul could not last long as he was dismissed for 15, but Rohit went on to play an innings that signalled his rich form in his first match as full-time India captain in the format.

Rohit made 48 from 36 balls with five boundaries and two sixes, but the star of the Indian innings was Suryakumar, who smacked three sixes and six boundaries to make 62 from 40 balls. Pant remained unbeaten on 17 but Shreyas Iyer (5) disappointed when it looked like India should have finished the game with ease.

The second match of the series will now be played at the Jharkhand State Cricket Association stadium Complex in Ranchi on Friday, whereas the third and final game will be held at the Eden Gardens in Kolkata on Sunday.