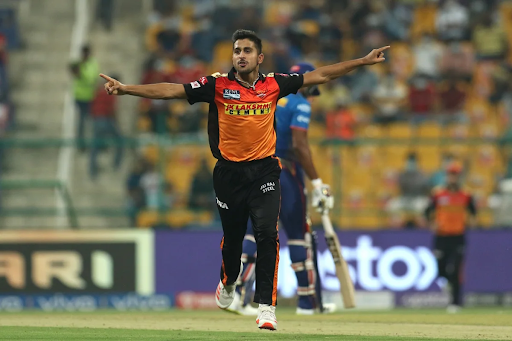 The Indian cricket team has added little-known fast bowler from Jammu and Kashmir, Umran Malik, who was a part of the Sunrisers Hyderabad team in the group stage of the Indian Premier League (IPL) 2021 tournament. Malik was selected by Sunrisers Hyderabad as a replacement for their left-arm fast bowler, T Natarajan, who has also played across formats for India.

Malik has been selected by the Indian cricket team as one of the nets bowlers. The right-arm fast bowler will now remain in the UAE despite SRH campaign getting over in the IPL 2021 tournament, which certainly was their worst given that the team finished last in the IPL points table.

Malik has played only one List A game and one T20 for Jammu and Kashmir before he made an appearance for Sunrisers Hyderabad in the IPL. He was initially recruited by the IPL 2016 winners as a net bowler, but he was drafted into the squad after the left-arm fast bowler T Natrajan was ruled out owing to the coronavirus.

Malik made an impressive start to the IPL, going over 150 KMPH on several occasions, which also caught the eye of the incumbent Indian cricket team captain Virat Kohli, who said that bowlers of his calibre must be looked after. Malik had delivered the fastest delivery of the IPL 2021 season, clocking 153 KMPH against Kohli Kohli’s Royal Challengers Bangalore.

After the match Kohli said,

“This tournament throws up talent every year. It’s good to see a guy bowling at 150 clicks. It’s important to understand the progress of individuals from here on, how to maintain your body and how you can get the best out of them. The pool of fast bowlers being strong is always going to be a good thing for Indian cricket. Whenever you see talent like this, obviously you’re going to have your eyes on them and make sure that you maximise their potential.”

It is being said that the presence of Malik will help India prepare better for the challenges in the ICC T20 World Cup 2021, wherein they are placed with teams such as Pakistan and New Zealand, who have impressive fast bowling attacks. India start their campaign on October 24 against arch-rivals Pakistan.