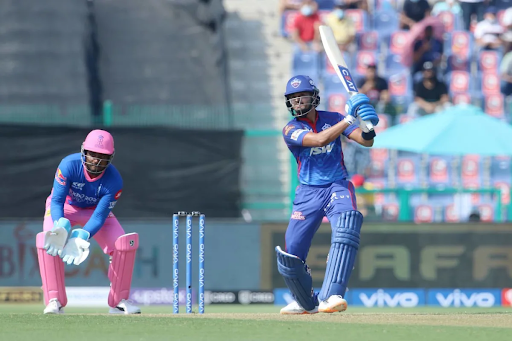 Delhi Capitals moved back to the top spot in the Indian Premier League (IPL) 2021 points table on Saturday afternoon after defeating Rajasthan Royals by a huge margin of 33 runs in the match number 36 of the second edition of this year’s tournament being played in the United Arab Emirates (UAE).

In the contest played at the Sheikh Zayed Stadium in Abu Dhabi on Saturday afternoon, Delhi Capitals batted first and made 154/6 from their 20 overs with Shreyas Iyer, their regular captain who is not leading the side this year, scoring 43 whereas others also chipping in with crucial contributions.

In return, Delhi Capitals just did not allow Rajasthan Royals batsmen to settle down as they restricted them to a poor total of 121/6 in their 20 overs, despite the opposition team captain Sanju Samson scoring an unbeaten 70 in their reply.

The victory powered Delhi Capitals to the top spot in the IPL 2021 points table as they now have 16 points from 10 matches including eight wins and two defeats. On the other hand, Rajasthan Royals slipped down to the second last position in the points table with eight points in nine matches which included four wins and five defeats.

It was the Rajasthan Royals who won the toss and decided to field. The decision was certainly right from the perspective of the Royals, removing the dangerous Delhi opening pair of Shikhar Dhawan (8) and Prithvi Shaw (10) in quick succession. Pant and Iyer resisted for a while, but Rajasthan Royals did not allow their partnership to flourish and removed the incumbent Delhi Capitals’ skipper for a run-a-ball 24.

Iyer continued to make giant strides towards gaining full form with the bat as he made 43 from 32 balls with the help of one boundary and two sixes. He was supported towards the end by Caribbean batsman Shimron Hetmyer, who cracked five boundaries to make 28 from 16 balls whereas all-rounders Lalit Yadav and Akshar Patel contributed with 14 not out and 12 respectively.

For Rajasthan Royals, Bangladeshi fast bowler Mustafizur Rahman was the pick among the bowlers as he returned with figures of 4-0-22-2 whereas left-arm India fast bowler Chetan Sakariya claimed 2/33 from his four overs. Kartik Tyagi and Rahul Tewatia also claimed one wicket each.

In their reply, Rajasthan Royals could never attain any sort of momentum as they kept on losing wickets at regular intervals. Liam Livingstone was dismissed for 1, Yashasvi Jaiswal fell for 5, David Miller made 7, Mahipal Lomror scored 19 as he was the only other batsman apart from Samson who was able to make it into double digits.

Samson waged a lone battle for Rajasthan Royals as he cracked eight boundaries and a six to make 70 not out from 53 balls, but he had absolutely no support from the other end. For Delhi Capitals, South Africa fast bowler Anrich Nortje returned with 4-0-18-2 whereas the other bowlers in Avesh Khan, Ravichandran Ashwin, Kagiso Rabada and Patel bagged one wicket apiece.