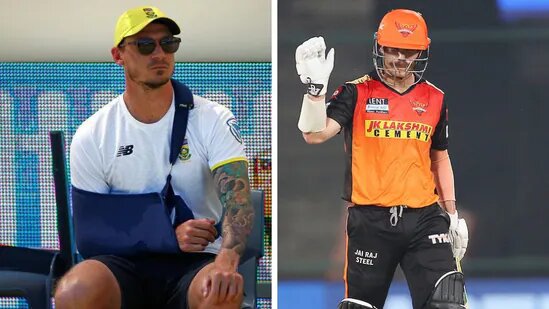 Two of the most shocking decisions of IPL 2021 are the sacking of David Warner from captaincy of Sunrisers Hyderabad on Saturday & on Sunday, dropping him from the team for the match against Rajasthan Royals. It was unexpected, unpredictable & looking at the track record of left handed batsman with SRH, the decision came as unwelcomed by the fans & critics.

Dale Steyn, South African pacer, feels that appointing Kane Williamson as the new skipper was an acceptable & a right move to make looking at the performance of David but dropping him from the was uncalled for given his track record.

David Warner is on the fifth spot in the list of IPL’s highest scorers, the only batsman to hit fifty half centuries & three times winner of the orange cap.

“It’s strange that he isn’t a part of the playing eleven. It’s understandable if they want to change ownership of captaincy for the next season, and keep Kane there. But David is still a phenomenal batter and I would still keep him in the eleven. But this might be the last time we see Warner in the Orange Army,”

Steyn strongly feels that management is hiding something & Tom Moody, Director of operations for SRH, has not justified the reason for the step taken.

“I don’t know if David may have questioned some of the decisions, maybe when Manish Pandey was left out. Sometimes, the management doesn’t appreciate that, I guess. The captain of the team also needs to take ownership of his squad and who’s going out on the field. Seems like there’s definitely happening something behind closed doors, the public is not aware of,”