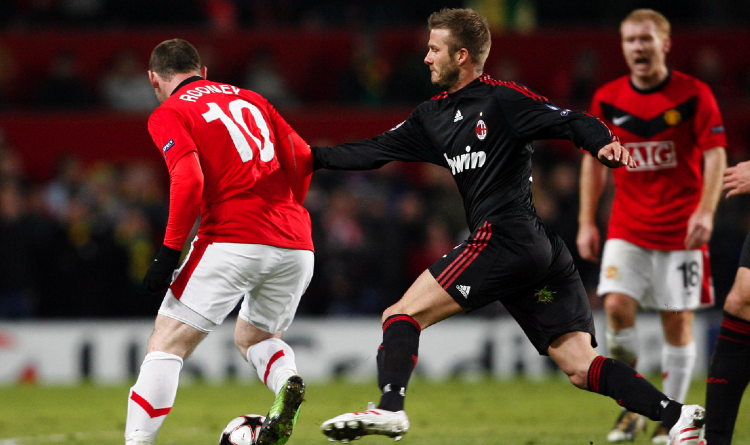 Wayne Rooney, David Beckham and Paul Scholes during the Champions League round of 16 back in 2010

The most interesting fixture of Europa League night: Manchester United will welcome AC Milan to Old Trafford for the first leg of their Europa League round-of-16 tie on Thursday, starting whistle is at 23:25 IST.

Manchester United are in great spirits heading into the clash with Milan. Solskjær`s team are rightly rated as the favorite of the meeting, but it will not be easy for the hosts either.

The two sides find themselves in similar standings in their domestic leagues. They each led the table a few weeks ago, but are now playing catch-up to their city rivals and have slim chances of triumphing in the league.

This makes the Europa League their most likely route to winning a trophy this season and both sides will give their all to secure a spot in the quarterfinals.

Manchester United easily beat Real Sociedad in the first round of the Europa League playoffs.

The first game ended in favor of Manchester United with a score of 4-0, and the return game ended with a draw 0-0.

Manchester United are in good form as last Sunday they interrupted their opponent’s incredible winning streak. Red Devils gained a confident great victory over incredible Manchester City with a score of 2-0.

Man Utd’s unbeaten streak is 11 matches now. In the previous six games, the English club has conceded only one goal.

Milan defeated Crvena Zvezda on aggregate in the 1/16 finals. Curiously enough, the Rossoneri advanced thanks to the away goal rule. Both games ended with a draw 2-2 in Belgrade and 1-1 in Milan.

Milan are currently second in Serie A, six points behind Inter. Apparently, their dreams of the Scudetto will have to say goodbye to at least the next season.

Last weekend AC Milan earned an away win over Verona 2-0. Given all the squad problems, this is a very big win.

In addition, not so long ago Milan defeated Roma and played a draw with Udinese.

Don`t miss out 💥: Zlatan and Calhanoglu could miss the Europa League match against Man Utd.

The two teams have faced each other 10 times. The head-to-head record going into this encounter is level as both have five wins apiece.

Statistical preview of the match Manchester United vs AC Milan:

A very impressive poster, that’s for sure, but there is no guarantee that it will correspond to the level of intrigue in this encounter. First of all, MU are really better now, and secondly, Milan very often do not play the best way against top teams. Milan have a lot of injuries, and this will also affect the result. The team of Ole Gunnar Solskjær is considered the favorite in this duel.

Bookmaker Parimatch gives a 3.55 to this scenario.