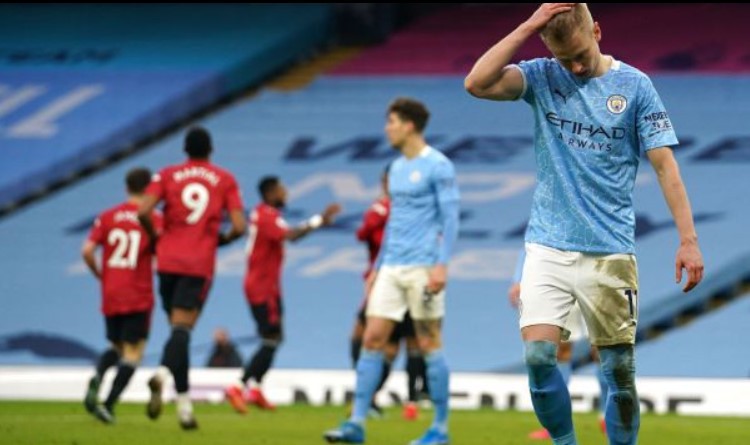 Manchester United defeated Manchester City at Etihad Stadium in a match of the 27th tour of the English Premier League. This loss was the first for Pep Guardiola’s team in the last 22 games. The previous defeat for the Citizens dates back to the previous November.

In the first minute, Gabriel Jesus lost the ball in the center of the pitch and went back to help his defenders. It would be better if he didn’t do that: the Brazilian overreacted and fouled Martial in the penalty area. Bruno Fernandes easily converted the shot from the spot.

Bruno Fernandes’ penalty is the earliest goal that Man City have ever conceded in a league match at the Etihad Stadium, and the first they have conceded within two minutes at home

In 20 EPL games before that, City had never conceded first. And, by the way, they could have got a second right away: Shaw ran into the box, but shot horribly from his right.

The home side came to their senses midway through the first half: Zinchenko had two good shots. After that, there were a couple of moments: Gundogan penetrated the penalty area without any impact and Jesus missed Marez’s cross.

City started the second half with a woodwork shot: it was Rodri who charged from the outside of the box.

United responded with a goal in the 50th minute: Henderson threw in for Shaw, Luke went down the flank, played with Rashford and shot into the far post from the left. It was United’s first goal since the game against the Big-6.

“Congratulations Manchester United first of all. Ten games left – now we arrive at the important part of the season. The last 10 games are important and we start next Wednesday. We will try to win as many games as possible to be champions. gainst West Ham we played much, much worse than today. Against West Ham we didn’t deserve to win and maybe today we didn’t deserve to lose. We were not good in front of goal – our strikers were not brilliant today – but it happens.”

Now, at the end of this magnificent hot streak, City are 11 points ahead of United despite losing another Etihad derby.

City are back in league action against Southampton on Wednesday (18:00 GMT) before travelling to Fulham on Saturday (20:00 GMT). United take on AC Milan in the Europa League last 16 first leg on Thursday (17:55 GMT), and host David Moyes’ West Ham in the league on Sunday (19:15 GMT).