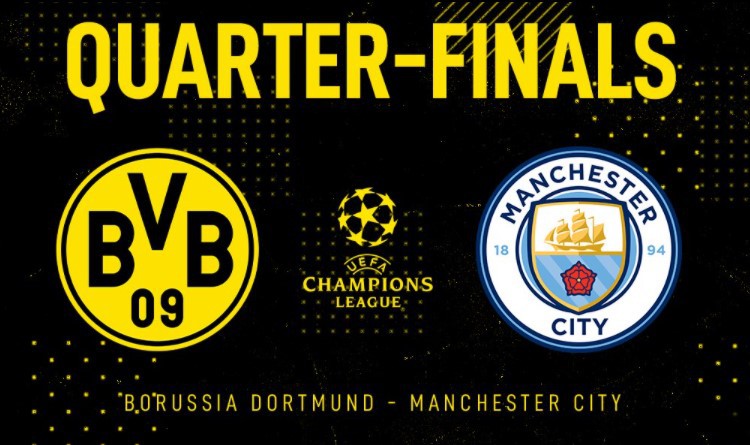 Each of the Champions League quarter-final pairings is extremely interesting, with Manchester City and Borussia Dortmund clashing at this stage, among others.

Man City have now won five games in a row, conceding just two goals. There is no longer any question of intrigue in the English Premier League title race. The nearest pursuer is 14 points behind, while the rest are even further away. There are just a few formalities left.

Dortmund, on the other hand, have a completely different situation. There are plenty of problems both with injuries and with the quality of the football itself. The Bumblebees have picked up just one win in their last five games, and last weekend they lost at home to Eintracht 1-2.

Don`t miss out 💥: Real Madrid vs Liverpool: Prediction and Preview.

City are performing excellently in the league, they are playing very confident in the FA Cup and have already reached the semo-finals stage, beating Everton 2-0 in the last round.

Pep Guardiola’s side have easily made it through the Champions League group stage, before facing Borussia Gladbach with the aggregate score of 4-0 on aggregate to advance to the quarter-finals.

According to reports from the team staff, all the players are fit and ready to play.

The eight-time champion and four-time German cup winner missed the top spot in the Bundesliga last season to Bayern and claimed silver medals. That kind of success secured a trip to the Champions League group stage, which the Yellow-Blacks passed quite successfully and made it through to the play-offs.

In the 1/8 finals of the spring stage of Europe’s top competition, Borussia were drawn against Sevilla, whom they defeated with a 5-4 aggregate score.

In the Bundesliga, BVB recorded 13 wins and four draws in 27 rounds to earn 43 points and occupy fifth place. The team’s performance has been inconsistent.

The most recent meeting between these two clubs was back in 2012 when Borussia Dortmund beat Manchester City 1-0. The goal was scored by Julian Schieber.

Statistical preview of the match Manchester City vs Borussia Dortmund:

Manchester City’s incredible form and Borussia Dortmund’s sluggish football allude to a win for the British top club. Even tho Erling Holland has scored in every Champions League game this season, his streak could come to an end sooner or later. And a meeting with a team conceding less than a goal per game on average seems like the perfect moment. So if he is silent, who else is going to score at the Etihad? A fully-fit and in-form City can sweep aside almost anything in their path, so we can only back a first-leg triumph for Guardiola’s men.

Bookmaker Parimatch gives 2.10 for this scenario.